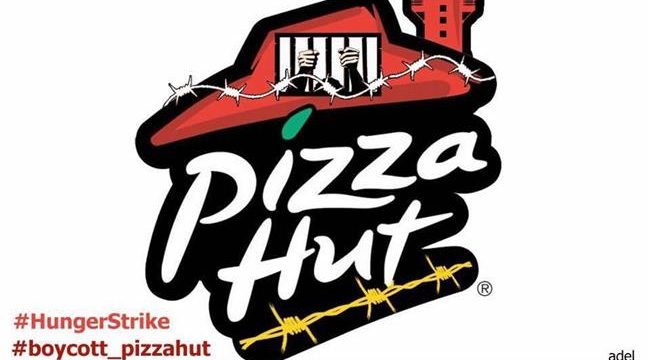 Press TV – Palestinians have called for a worldwide boycott of the American food franchise, Pizza Hut, after its Israel branch ran an insulting advertisement that mocked Marwan Barghouti, the leader of a weeks-long mass Palestinian hunger strike.

The senior jailed figure of the Palestinian Fatah movement started the protest action on April 17 and was joined by some 2,000 fellow inmates. The mass strike, dubbed the Freedom and Dignity Strike, seeks to force Israeli authorities into improving the prison and confinement conditions.

Earlier this week, Pizza Hut issued a Facebook post, using a frame grab from a video prepared by Israel’s prisons authority a day earlier, which purportedly showed Barghouti taking food in his cell.

The picture was superimposed by a text reading, “Barghouti, if you’re going to break a strike, why not pizza?” It was also adapted with an image of a pizza box popping out from underneath the bunk bed, and a pizza slice placed in the wash basin.

The insulting post infuriated Palestinians, who took to social media to blast Pizza Hut over the advertisement. Some have redesigned the restaurant’s logo so it features prison bars and barbed wire.

“Pizza Hut’s mockery of leaders of Palestinian prisoners on hunger strike for freedom and dignity adds insult to deep injury,” said the group’s Mahmoud Nawajaa in an email to AFP. “We support grassroots Palestinian calls for a worldwide boycott of Pizza Hut, especially in the Arab world.”

The franchise’s official Facebook page later apologized for the “completely inappropriate” advertisement, claiming it “does not reflect the values of our brand.”

The National Committee for the Freedom and Dignity Strike, which acts as a front for the Barghouti-led campaign, said Tuesday that the footage released by Israeli prison guards dated back to 2004, and that its release was a deliberate attempt to dent the hunger strikers’ will.

The footage comprises two separate videos without timestamp, featuring a man whose face is not clearly visible. The committee also said Barghouti’s hairline had now receded farther back than that of the man seen in the videos.

Also on Sunday, Barghouti’s wife Fadwa told a press conference that the footage was “fabricated,” and called the move “despicable.”