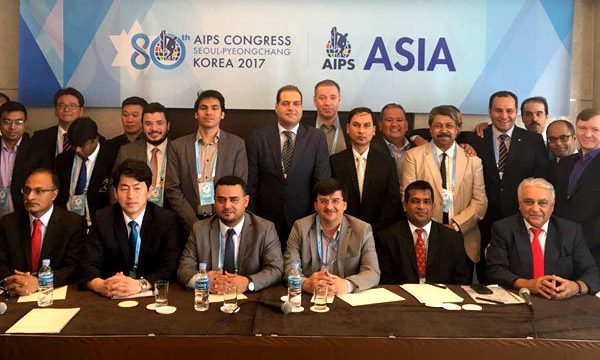 MNA – Iran has been appointed as president of the three-member Executive Committee of AIPS (International Sports Press Association) Asia.

The nomination was made during elections for the positions of president, vice president, treasurer and for the members of the Executive Committee of AIPS Asia held during the 80th AIPS Congress in Seoul and PyeongChang underway from May 8-13, 2017.

The milestone 80th AIPS Congress provides members the opportunity to discuss the current issues in sports journalism and international sport, all the while providing the suitable and ideally current Olympic backdrop in the region set to host the 2018 Winter Olympic Games.

The first two days of the Congress were in the capital Seoul, in the centrally-located Lotte hotel, after which AIPS delegates and guests will move to PeyongChang where they will have the opportunity to visit the mountain clusters and official venues of the Winter Games.

The number 80 is the main item to mark the 80th AIPS Congress. Number 8 means infinite and 0 represents the unity of sports reporters, meaningfully wishing for an unfettered development of AIPS.