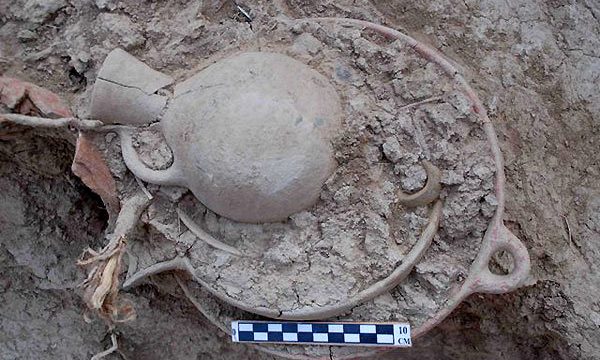 Potteries found in S. Eastern Iran dates back to 5,000 yrs ago

IRNA – The Village of Keshik in Sistan and Baluchestan Province can be considered as one of the centers for production of fine gray pottery in the third millennium BC, Research Institute of Cultural Heritage and Tourism (RICHT) says.

The first season of archaeological studies in the village in the city of Nikshahr was conducted upon permission from the RICHT with an aim of preparing the national registration file and determining the limits of the area, Morteza Gorgi Head of the team for calculation and determination of the limits of the Keshik Village said, according to the RICHT Public Relations Office.

The production had close relationship with its concurrent areas in the Bampour Valley and Kach Makran.

Gorgi said he and his team for the first time have identified structures of graves dating back to the third millennium BC over the course of construction activities for water piping in the village.

In the surveys conducted later for determining the limits of the area, the industrial sectors as well as architectural structures related to the era were also identified, he said.

He went on to say that with regard to the characteristics of the area, in addition to the calculations conducted, magnetic measurements (geophysics) were also used in order to achieve the desired objectives of the project.

In general the Keshik area consists of architectural structures and graves dating back to the third millennium BC, historical era and early centuries of Islamic period, Gorgi noted.

The archaeologist also expressed hope that, following assessing the limits of the area, ground will be prepared for controlling the damaging activities within the framework of regulations.

With the continuation of studies, Gorgi said, the nature of communication in the third millennium BC in the southern half of the Indo-Iranian borders as well as the role of areas such as Keshik will be discovered.

Iran’s pottery, Keshik, Sistan and Baluchestan, Tourism, Visit Iran May 8, 2017
Iran, Afghanistan to set up five joint committees to prepare final document for cooperation
How did Russia grab US safe zones idea for own favor?