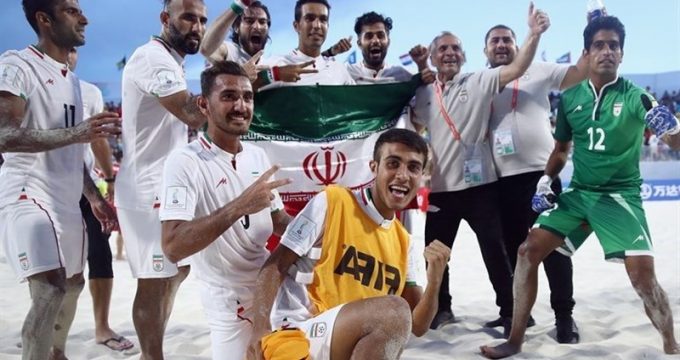 Tasnim – Iran ended FIFA Beach Soccer World Cup Bahamas 2017 on a high with a 5-3 win against Italy in the play-off for third place to become Asia’s highest ever finisher in the history of the tournament.

These two teams met during the group stage with Italy edging Iran 5-4 in a thrilling match.

Mohammad Ahmadzadeh scored his seventh goal of the tournament when he put away a second-chance opportunity after Moslem Mesigar’s shot was parried into his path.

Ahmadzadeh scored his second of the match early in the second period on another second-chance opportunity to take his tournament tally to eight.

Mohammad Mokhtari then scored a phenomenal overhead kick to give Iran a three-goal cushion, which was fitting as Iran has attempted the most overhead kicks this tournament.

Italy got back into the match courtesy of none other than Gabriele Gori, who tied Dejan Stankovic in second place on the all-time goals in a single tournament record (16). Gori then made it 17 for the tournament with a curling effort from a set piece. Less than a minute later, Mesigar scored his second of the tournament.

Dario Ramacciotti brought the Azzurri back to within one goal with a well-placed, close range header. But it wasn’t enough for the Italians as Ahmadzadeh completed his hat-trick with a late penalty to ultimately make history for Iran.