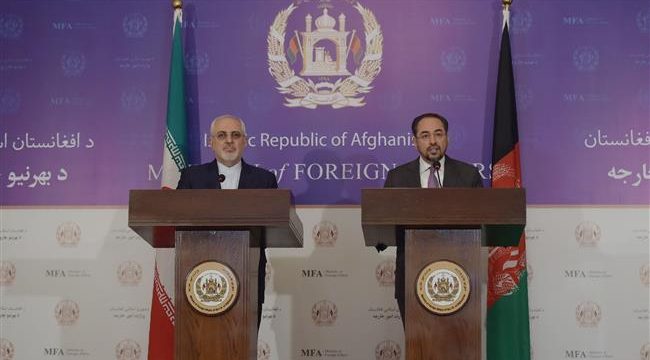 Press TV- Iran’s Foreign Minister Mohammad Javad Zarif has traveled to Afghanistan which is facing a resurgent Taliban and an emerging Daesh threat despite the presence of foreign troops.

In a joint press conference with his Afghan counterpart Salahuddin Rabbani in Kabul on Sunday, Zarif called for further cooperation between the two neighbors to fight terrorists.

Iran and Afghanistan, he said, have many opportunities to cooperate in such fields as the fight against terrorism, violence, narcotics and human trafficking, calling it in the interests of both nations.

“We do not make a distinction between good and bad terrorism,” Zarif said, adding countries should fight terrorist groups through cooperation to make their borders secure.

Zarif also underlined the need for the resolution of issues related to shared water resources between Iran and Afghanistan, saying it would benefit their environments.

Rabbani said his talks with the Iranian foreign minister about boosting political, economic and transit relations had been constructive.

The Afghan minister further praised the Islamic Republic for supporting displaced Afghans and the country’s refugees.

The Iranian minister called for more cooperation with Kabul, saying the two friendly and brotherly countries share the same culture.

The US and its allies invaded Afghanistan in 2001, triggering a war that has killed thousands and cost tens of billions of dollars. The offensive removed Taliban from power, but the country is still witnessing terrorist attacks.

Taking advantage of the chaos, Taliban militants are regaining ground in the country while Daesh terrorists are also attempting to expand their presence there.

Earlier this week, former Afghan president Hamid Karzai held the US responsible for the rise of Daesh in his homeland, saying Washington is in cahoots with the Takfiri outfit it has created.

“Daesh is a US product,” Karzai said in an exclusive interview with the US-based Fox News network. “Daesh — which is clearly foreign — emerged in 2015 during the US presence.”