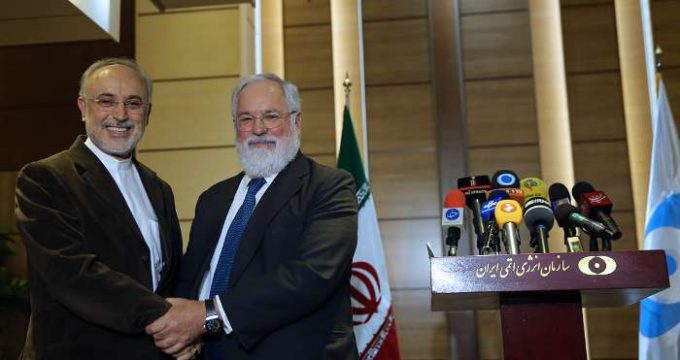 Wary of Trump, EU tries to get closer to Iran

ISNA – Wary of U.S. President Donald Trump’s tough talk on Iran, the European Union is courting Tehran to show Iranians preparing to vote in a May 19 presidential poll that it is committed to a nuclear deal and they stand to benefit, EU diplomats say.

Europe’s energy commissioner is leading more than 50 European firms in a business forum in Tehran over the weekend – the latest bid to foster new ties in the 16 months since Iran limited its nuclear program in exchange for sanctions relief, Reuters reported.

Meeting with Iran’s atomic chief Ali Akbar Salehi, Commissioner Miguel Arias-Canete echoed the EU’s mantra that it is “fully committed” to the 2015 deal and expects the same from all other parties.

But the bloc’s leverage remains limited – particularly if it is not able to shield European firms from the risk of remaining U.S. sanctions and encourage big banks to reverse over a decade of Iran’s exclusion from the international financial system.

Some Western companies have returned – plane makers Airbus and Boeing and carmakers Peugeot–Citroen and Renault – but many more have hung back, fearing Trump will tighten the screws on an already complex set of rules for engaging with Iran.

The pace and scale of Western investment is at the heart of a challenge by rivals of Iranian president Hassan Rouhani, who is seeking re-election in May.

The Trump administration said on April 18 it was launching an inter-agency review of whether the lifting of sanctions against Iran was in the United States’ national security interests, while acknowledging that Tehran was complying with the deal to limit its nuclear program.

EU diplomats voiced concern that a more confrontational stance by the Trump administration could empower Iran’s hardliners ahead of the elections – although there is no sign the United States intends to walk away from the deal.

In recent months, European leaders have been frequent visitors to Tehran with businessmen in tow – in an effort to keep alive the 2015 accord, which also has the support of Russia and China.

The risk of falling afoul of U.S. measures has been enough to persuade major Western banks to stay away from Iran, and Tehran accuses Washington of undermining the nuclear deal by scaring investors away from Iran.

There are also signs that the EU’s firm stance has given U.S. officials pause, with senators saying they delayed a bill to slap new sanctions on Iran due to worries over how the bloc would react and the Iranian presidential elections.