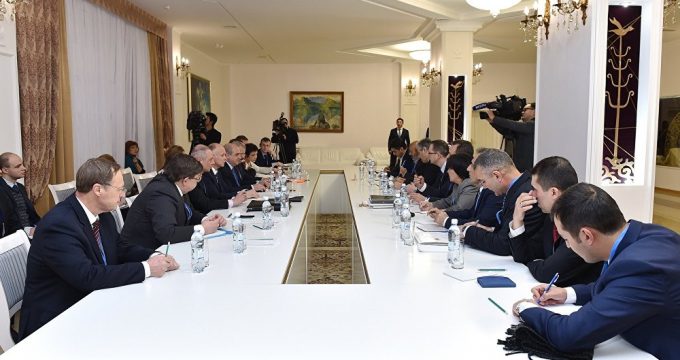 MNA – Representatives of Russia, Iran and Turkey as guarantors of a nationwide ceasefire in Syria have resumed bilateral and trilateral talks in Astana on Thursday, according to TASS.

Guarantors of the Syrian ceasefire are represented at the high level. The Russian delegation is headed by the special presidential envoy for Syria Alexander Lavrentyev, the Turkish delegation by Foreign Ministry’s Deputy Undersecretary Sedat Onal while the Iranian one by Deputy Foreign Minister Hossein Jaberi Ansari.

Jaberi Ansari held bilateral talks with Sedat Onal on Wednesday where the two sides discussed the achievements of the expert meeting held in Tehran, the current sitation in Syria, and the challenges and needs ahead of the Astana process.

They also conferred on the points of agreement and differences on the Syrian crisis and ways to settle it.

Jaberi Ansari also met with met with Staffan de Mistura, the UN mediator for Syria, on Wednesday. During the meeting, the two sides discussed the latest developments regarding the situation in Syria and called for serious and real determination of all parties involved in the talks to find a proper solution for the crisis.

The US delegation will be headed by Assistant Secretary of the US Department of State Stuart Jones.

The fourth round of the intra-Syrian talks in Astana got underway on May 3. In addition to delegations from countries acting as guarantors of the ceasefire (Iran, Russia, Turkey), the US delegation headed by Assistant Secretary of the US Department of State Stuart Jones, De Mistura as well as head of Jordan’s delegation are participating in the talks.

Astana talks, Iran-Russia-Turkey trilateral meeting on Syria, Syria crisis May 4, 2017
Next high-level meeting on Syria in Astana to take place in Mid-July
Photos: Zemestanyurt mine collapse in Golestan province