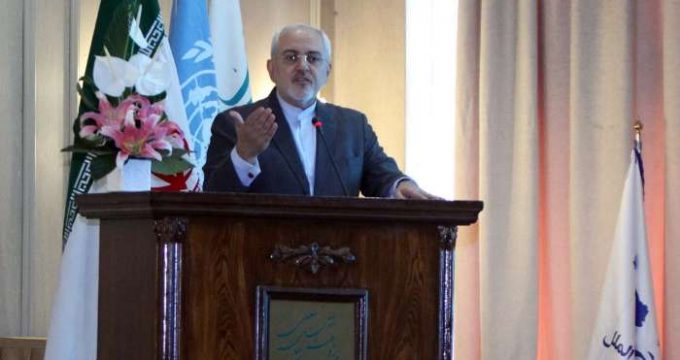 IRNA – Foreign Minister Mohammad Javad Zarif said on Tuesday that civilizational intolerance is the root cause of extremism in the world.

The West’s one-sided civilization outlook is now moving forward to civilizational and cultural inequality leading to promotion of extremism round the globe, Zarif said.

Iran has inherited a very rich culture and civilization, he said, adding that last week there was a meeting between top ten civilizations in the world in which Iran, Iraq and Egypt represented Muslim world.

They have been inspired by the Islamic civilization and attached to its principles and teachings to glorify their move, Zarif said.

Regretfully the world is now approaching towards civilizational and cultural inequality leading to creation of extremism in the world, the foreign minister added.

Islam was promoter of dialogue among civilizations and denouncer of violence and extremism, Zarif underlined.

“Dialogue among Civilization” for the first time ever was proposed to the United National General Assembly ‘by the then President Mohammad Khatami’ and head of OIC, he said.

Iran has been promoter of solidarity, unanimity and interaction among world countries, Zarif underlined.

On early days of President Hassan Rouhani and before ignition of extremism by Daesh, Iran called for global cooperation and contribution in order to set up a world free from violence, he said.

Zarif reiterated that regretfully, Muslim world is now witnessing the highest rate of conflicts and most victims of Daesh terrorists group are not Christians, Jews or even Shia, but the oppressed Sunni people in Syria and Iraq who are victims of barbarism.

He went on to say that the World of Islam is now in dire need of solidarity and convergence as waves of Islamophobia in the west and insult to Islam is on rise which requires a new move in the Muslim world to quell the mishap.

‘Once again, I would like to announce that the Islamic Republic of Iran is ready to broaden cooperation with all Islamic countries without any exception,’ he said.

Zarif said that the entire region requires our convergence and unity and the Palestinian nation is in dire need of such assistance and unity.