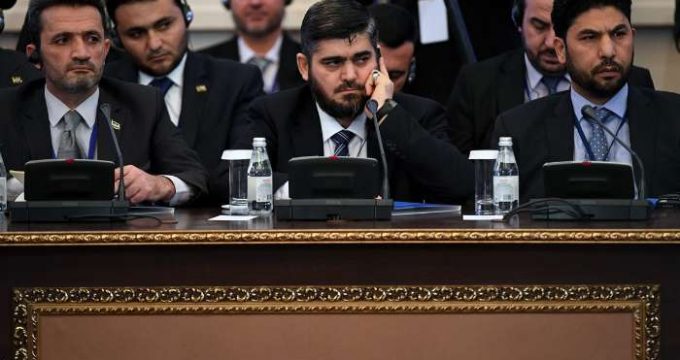 Press TV- The so-called Syrian National Coalition (SNC) says the opposition is halting its participation in the latest round of the Astana peace talks aimed at bringing an end to the deadly conflict in the Arab country.

SNC spokesman Ahmad Ramadan said on Wednesday that the opposition “delegation is suspending the meetings” over alleged airstrikes on civilians.

“The suspension will continue until shelling stops across all Syria,” he added.

The move came hours after the fourth round of the talks, mediated by Iran, Russia and Turkey, began with a series of bilateral meetings in the Kazakh capital earlier in the day.

Reacting to the development, Aidarbek Tumatov, a senior Kazakh Foreign Ministry official, said he expected that the Syria opposition would return to the negotiating table on Thursday.

“I hope that tomorrow the opposition will again take part (in the talks),” Tumatov said.

The Astana discussions were set to focus on a Russian plan to resolve the Syria crisis that began in March 2011.

The plan calls for the creation of “de-escalation zones” in militant-held areas in the Syrian provinces of Idlib and Homs as well as the Eastern Ghouta region near the Syrian capital, Damascus, AFP reported, citing a version of the initiative provided by a source close to the opposition.

The Russian proposal seeks to “put an immediate end to the violence” gripping Syria and “provide the conditions for the safe, voluntary return of refugees”.

It further urges the creation of “security zones” with checkpoints and monitoring centers manned by government troops and militants.

The plan also reportedly tasks Turkey, Iran and Russia — as the guarantors of the agreement — with setting up a joint working group to draft maps of the safe zones by May 22 and monitoring a process of “disarmament.”

Additionally, the trio would help the fight against extremist factions including the Daesh Takfiri terrorist group.

Tumatov confirmed that the delegations were discussing a proposal for safe zones in Syria.

“If the guarantor countries agree and sign the document then accordingly Damascus and the opposition will be obliged to fulfill it,” the official told the Interfax news agency.

The first round of the Astana talks between Syria’s warring sides took place on January 23-24, followed by the second round on February 15-16 and the third round on March 14-15.

Syria blames the conflict in the country on some Western states and their regional allies that have long pushed for the ouster of the Damascus government.