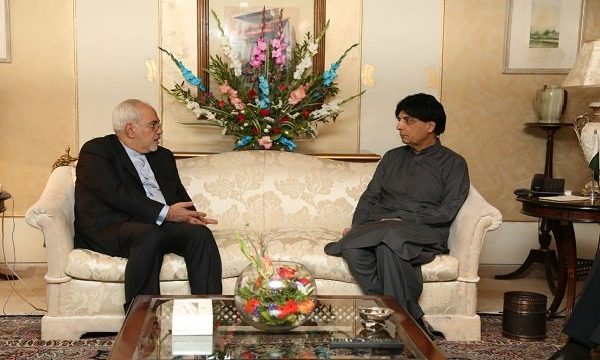 During Zarif’s meeting with the Interior Minister Chaudhry Nisar Ali Khan, the Pakistani senior official expressed his condolences and sympathy to the Iranian nation and government over the death of Iranian border guards, adding “Iran and Pakistan enjoy higher than normal relations and the people of the two countries have deep, historical ties.”

“We are ready to settle all issues between the two countries on political and military levels,” he stressed.

The Pakistani minister noted that his country wishes to send this message to the world that Iran and Pakistan will always stand by one another and make joint efforts to settle problems.

The Iranian top diplomat, for his part, highlighted the need for resolution of border issues, a strong and effective fight against terrorists, as well as the arrest and persecution of terrorist groups, especially the perpetrators of Mirjaveh terrorist attack.

During the meeting, the two sides also deemed drug trafficking, illegal border crossing and terrorist acts among the two countries’ common concerns, and decided to review these issues in the border commission to find solutions for such threats.

Zarif and Nisar Ali Khan also called for further interaction between border and security officials of the two countries.