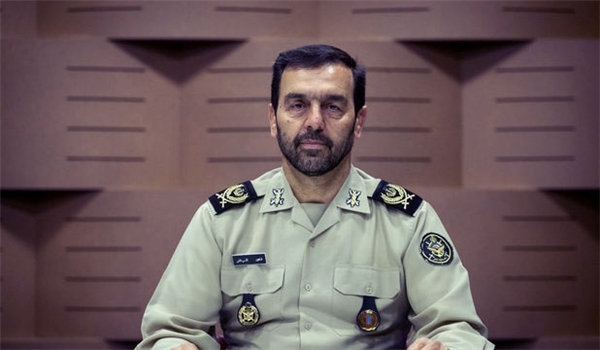 FNA-  Spokesman of the Iranian Army General Shahin Taqikhani underlined that the extent and type of the military drills staged by the country’s armed forces are decided based on enemy threats and battles fought in the current era.

“The wargames are the closest and best real tests for fighting against threats during crises and they are staged based on today needs and based on threats and conditions of contemporary battles,” General Taqikhani said on Wednesday.

He underscored that not only the weapons and military equipment, but also the human resources’ combat preparedness are tested and assessed in the drills.

Taqikhani said that the Iranian Armed Forces’ preparedness has acted as a deterrence against enemy threats and removed the shadow of war over the country in the past three decades.

“We have powerful Armed Forces which can influence and change the enemy’s military equations,” Brigadier General Heidari said.

He underlined that those who kept on saying that they had military option against Iran on the table cannot ignore Iranian Armed Forces’ might.

Also in April, Chief of Staff of the Iranian Armed Forces Major General Mohammad Hossein Baqeri underlined that the country’s Armed Forces are prepared to give a rigid response to any possible aggressive act by the enemies.

“We are ready to take speedy reaction against enemy’s possible threats and deepening intelligence superiority over enemy’s movements is our top priority,” General Baqeri said.

He reiterated that Iran’s missile strength is admirable.