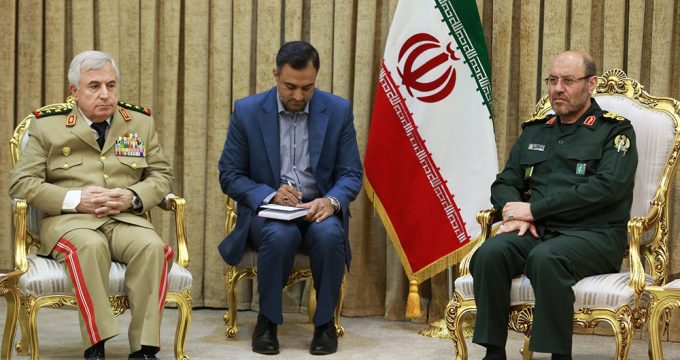 US strikes on Syria aim at ensuring Israel’s security

MNA – Minister of Defense Hossein Dehghan in a meeting with Syrian Army Chief Ali Abdullah Ayoub said the US missile attacks on Syrian air base aimed to bolster terrorists and ensure security of the Israeli regime.

Brig. Gen. Hossein Dehghan held a meeting with Syrian Chief of the General Staff of the Army and Armed Forces, Gen. Ali Abdullah Ayoub, in Tehran on Tuesday, where the two sides highlighted cooperation in combating terrorism and restoring peace and security to the region.

“The scourge of terrorism that is today ailing Syria and Iraq is in fact a global threat that if not controlled and terminated, will endanger the security of the whole world,” Dehghan said, adding “Iran has been trying to warn against the dangerous consequences of terrorism at Moscow security conference in the last three years.”

Dehghan slammed Saudi Arabia for sponsoring terrorists in service of the US and Israeli regime’s objectives, adding “regrettably, the Saudi regime neither cares about the Islamic aspects of the situation nor respects the Arab nation and government of Syria. The Saudi measures have escalated tension and conflict in the region.”

The Syrian Army Chief, for his part, thanked the Islamic Republic for its support in the fight against terrorism, adding “the Syrian nation and Armed Forces will continue fighting terrorists until the country has been fully liberated.”

“We are clearly witness to the effective support of the Zionist regime to the terrorists and believe that the US in complicity with Israel and terrorist groups such as ISIL and Al-Nusra Front seeks to change the geopolitics and geography of the region and partition Muslim countries.”

The only solution to settle the Syrian crisis is through dialogues among the Syrian sides, he stressed.