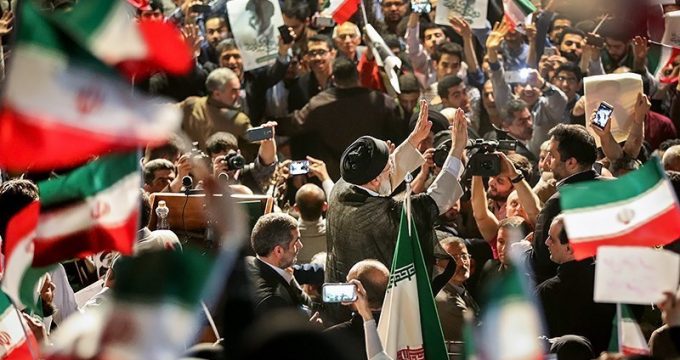 President Hassan Rouhani, who is seeking another term, and two other aspirants, Tehran Mayor Mohammad-Baqer Qalibaf and member of Iran’s Expediency Council Mostafa Aqa-Mirsalim, further laid out their plans in televised remarks on Monday.

President Rouhani said his administration had opted for patience and tolerance against critics but was against the “destructive” bids targeting it, calling such drives illicit from both legal and religious standpoints.

In the area of foreign policy, he said, his team had adopted “constructive interaction” with the world, while giving primacy to Iran’s neighbors and Muslim countries.

“We will interact with Asian, European, American, and all countries that do not harbor animosity against us and that act justly,” he said.

The president said there were several reasons why Iran had to be prepared to defend itself, including the presence of terrorist groups in the region.

“The United States has not abandoned its acts of mischief against the people of Iran. The stronger our national and regional powers get, [the more] American mischief will be prevented,” President Rouhani said.

He also said that youths have to be given more sway in the country, adding that the criterion to pick cabinet members will be competence not age.

Offering his potential administration’s policy vis-à-vis the United States, Qalibaf said the proper “fight against the US” takes place on the economic stage.

“The only way to battle the enemy is [to enable] economic progress… Today, our diplomacy should be [employed] in the economic area,” he said.

Qalibaf, who has been a strong critic of a 2015 nuclear accord between Iran and world powers negotiated under the Rouhani administration, said nevertheless that his administration would stand by the deal because “the establishment had opted for negotiations,” which led to the accord.

The Tehran mayor, however, said the accord had been followed by the Europeans’ boosting their Iran exports but had neither contributed to the people’s economic situation nor created jobs.

He reiterated a pledge to create as many as four million jobs and repeated his allegation that four percent of the population was now receiving the lion’s share of the country’s wealth on the back of purported connections.

Mir-Salim said he would attempt to “rescue the country from economic and social woes.”

He said that while he had been in various capacities under previous administrations, he had offered plans to reduce the level of pollutants in Tehran’s air. The plans, though, did not come to fruition, Mir-Salim said, pledging to find a solution for the issue with the assistance of experts if elected.

The Iranian electorate will go to the polls on May 19.