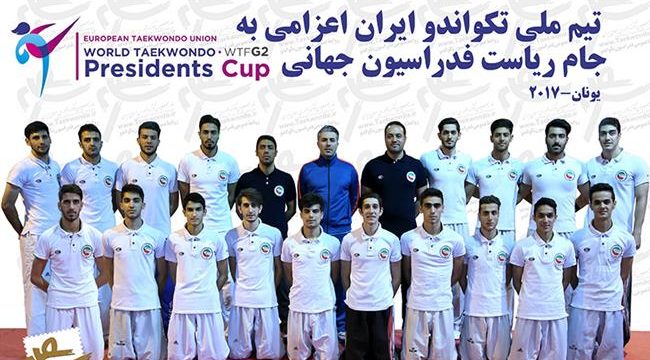 Press TV- The Iranian men’s national taekwondo team has demonstrated commendable displays of spinning kicks and fast kicking techniques at the second edition of World Taekwondo Federation (WTF) President’s Cup G2 in Greece, and clinched the title at the end of the international tournament.

On Sunday, the Iranian team stood proudly on the top podium, having received four gold medals through Mohammad Kazemi, Mirhashem Hosseini, Armin Hadipour and Abolfazl Yaghoubi in the minus 54-kilogram, minus 58-kilogram, minus 63-kilogram and minus 68-kilogram weight categories respectively.

Sajjad Mardani also took a bronze medal in the over 87-kilogram section after losing to Radik Isayev from Azerbaijan 10-12 in the semi-final round.

Russia sat in the second place with three gold and two bronze medals. Azerbaijan rounded off the podium, having pocketed one gold, two silver and one bronze medals.

The second edition of the WTF President’s Cup G2 started in the Greek capital city of Athens on April 27, and finished on April 30, 2017. It included Kyorugi and poomsae forms.

The tournament brought together more than 2,000 male and female taekwondo practitioners from various world countries, including Azerbaijan, Finland, the Islamic Republic of Iran and Russia.

Kyorugi is a dialogue and it is the center of taekwondo. It means not only sparring but also a sort of real fighting. But in most cases it means the sparring or competition. The original implication of Kyorugi is to measure a taekwondo practitioner’s power with their opponent’s technique.

Taekwondo poomsae is a combination of basic actions and movements exercised with imaginary opponents.

Gold medalists added 20 points to their qualification rankings for the 33rd edition of the Olympic Games scheduled to be staged between July 24 and August 9 in the Japanese capital city of Tokyo, with more than 12,000 athletes expected to participate in the sporting event.

Silver and bronze medalists at the second edition of the WTF President’s Cup G2 also added 12 and 7.20 points respectively to their 2020 Summer Olympics qualification rankings.