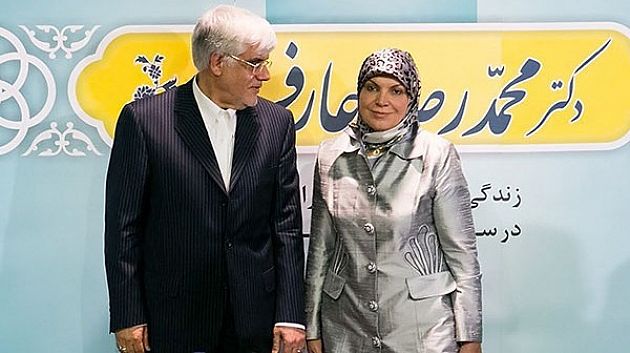 Iranian Diplomacy- The 2009 presidential election was a turning point for potential first-ladies in terms of attracting publicity. It was the first time Iranian presidential candidates, all men by the Guardian Council’s interpretation of the constitution, were accompanied by their wives. Nonetheless, the pattern was not replicated in the two presidential elections that followed.

During the tenth presidential election in 2009, Zahra Rahnavard, wife of Mir-Hossein Mousavi, stood by his side during the campaigns, while Fatemeh Karroubi was appointed as head of campaign headquarters of her husband, Mehdi Karroubi. The decision by the two Reformist candidates emboldened the two other candidates to follow suit.

Mohsen Rezaei, another candidate of the 2009 elections, registered for presidential election with his wife by his side. Mahmoud Ahmadinejad also welcomed the idea. His wife, Azam Farahi, attended his electoral gatherings, unlike the previous election in 2005, which led many to the conclusion that it was a response to the move by electoral rivals.

The 2013 presidential election saw a similar pattern. Mohammad-Reza Aref, Reformist candidate, attended press conferences and public gatherings with his wife, Hamideh Moravvej, a dermatologist. The Principlist Bagher Qalibaf also had his wife by his side. Zahra Moshir, the wife of Tehran mayor, already held a post in her husband’s organization, serving as advisor and director general for women’s affairs in Tehran Municipality. In Qalibaf’s previous presidential bid in 2005, however, she had been absent from public sphere.

The trend has continued in this year’s presidential election, and not only during registration for candidacy. In a recently released electoral clip, Ebrahim Raisi, candidate from the Principlist camp, speaks of his personal life and his marriage. It was then that the media realized he was married to Jamileh Alamolhoda, assistant professor at Shahid Beheshti University and daughter of Ahmad Alamolhoda, the conservative cleric of Mashhad, Iran’s second largest city.

An interview of Jamileh Alamolhoda with a pro-Raisi website, during which she spoke of Ebrahim Raisi’s close ties to [hardliner] cleric Mesbah Yazdi made headlines a few days later, but was later called ‘fabricated’ and was removed from Principlist websites and media outlets.

So far, the incumbent president Hassan Rouhani has made no significant effort to engage his wife, Sahebeh Rouhani, in politics. The current first lady’s presence is limited to public occasions such as hosting wives of foreign ambassadors to Tehran. Zahra Sadeghi, the wife of Reformist President Mohammad Khatami also kept a low-profile during the eight-year presidency of her husband, despite the fact that she was raised in a politically active family, being the niece of Imam Musa Sadr, the patron of Lebanon’s Shia community in the 1970s. Effat Marashi, the wife of Akbar Hashemi Rafsanjani, however, led a different path. In Iran’s political history, she is known for two famous occasion, saving her husband from an assassination attempt in 1979 and during the early months after the revolution, and also during the 2009 elections, when after casting her vote, she asked citizens to ‘pour into the streets’ if any vote-rigging took place.

Despite the efforts, it seems that some candidates have misunderstood the move by Mir-Hossein Mousavi and Mehdi Karroubi in 2009. Zahra Rahnavard, wife of Mir-Hossein Mousavi, was a seasoned politician herself, and had served as political advisor to the Reformist President Mohammad Khatami. Fatemeh Karroubi was also a known politician, serving as member of the parliament and deputy minister of labor. That is, they would have already known the ropes in Iran’s politics had they become the first lady of the Islamic Republic of Iran. Neither the wife of the Reformist Mohammad-Reza Aref, nor Jamileh Alamolhoda, wife of Ebrahim Raisi, had experience in politics. Lack of political experience among these potential first ladies may create challenges for the candidates.

* This translation is an abridged version of the original article published in Fararu website. Minor modifications have been applied to the text for the sake of clarity.