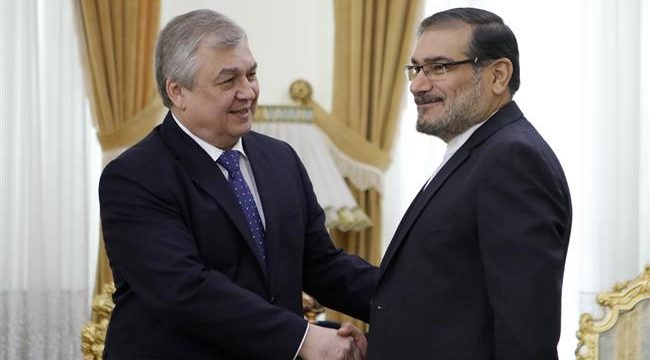 Shamkhani: US’ meddling in Syria to bear no fruit

MNA – Iran’s Supreme National Security Council (SNSC) Ali Shamkhani said here on Thursday that terrorism is passing through borders like a dangerous virus. Shamkhani made the remarks in a meeting with President Vladimir Putin’s special envoy for Syria Alexander Lavrentiev in Tehran.

He also called for taking coordinated, collaborative and non-discriminatory approaches to tackle terrorism.

During the meeting, the two sides also reviewed the latest regional developments, Syria in particular and expressed the need for fostering on the battlefields and political coordination for settlement of Syrian crisis.

Touching upon the atrocities committed by terrorist groups against the Syria innocent people, he added if the European countries worry about the presence of terrorists in their countries, they should prevent the dispatch of weaponries and workforce for terrorists.

Touching upon Iran, Russia and Syria as well as resistance movement cooperation for tackling terrorism, Shamkhani said “we have always been committed to settlement of Syria crisis through the political means; we believe that military solution is the sole way for tackling the groups who are not ready to lay down their arms,” he added.

He added the Syria talks in Astana, Kazakhstan capital, has played a pivotal role in formation of truce in Syria, adding that the mediators should not be allowed to provoke some countries that are against the continuation of truce or are trying to hinder the progress of peace negotiations in Syria.

Censuring the recent US missile attack on Syria, Shamkhani called for formation of an independent fact-finding mission to probe the routes of dispatching chemical weapons to terrorist groups in Syria and Iraq, adding the illegitimate and illegal US missile operations should be prosecuted.

The US military meddling in Syria under the false excuses, he said, is considered as passing the failed policies in Iraq and Afghanistan and would bring about no outcome but US failure in this Arab country.

The Russian envoy, for his part, supported Iran’s constructive role in establishing peace in Syria, adding “Moscow continues to take military action against terrorists and those who are not committed to a political solution for tackling terrorism.”

Lavrentiev underlined that Russia would continue its combats with the ISIL and Takfiri al-Nusra Front terrorist groups , while perusing political solution for settlement of crisis in the region.

The Russian envoy arrived in Tehran on Thursday morning.