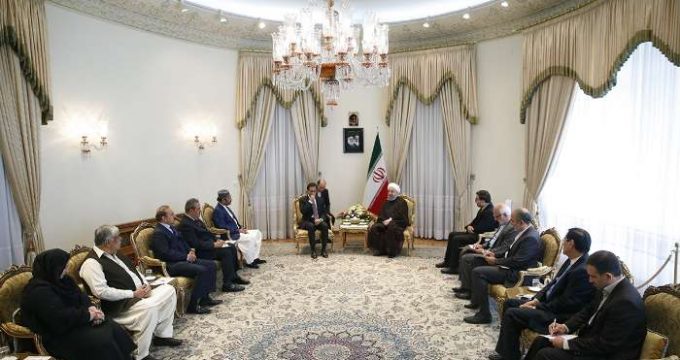 MNA– Iranian President Hassan Rouhani said countries which for years have provided financial and military support for terrorist groups cannot claim to be combating terrorism under the pretext of coalitions.

Security of the region and the Islamic world is important and all countries based on their Islamic duty and good neighborliness should work to restore security and stability in the region, Rouhani said on Monday in a meeting with Speaker of the National Assembly of Pakistan Sardar Ayaz Sadiq.

Describing the ties between Iran and Pakistan as friendly, brotherly and strong, president said that Iran and Pakistan enjoy mutual interests and stressed the need for comprehensive development and strengthening relations and cooperation between the two countries and the realization of high trade turnover to between Tehran and Islamabad.

Referring to proper grounds for expansion of all-out cooperation between the two countries, President Rouhani expressed the hope to develop economic, political and cultural cooperation, as well.

Islamic Republic of Iran has always been by the people of Pakistan during the past 70 years, and no doubt the increasing ties between officials and representatives of the two countries can be effective in strengthening and developing cooperation, Rouhani underlined.

Iran is ready to fully meet the needs of Pakistan in the energy sector, Rouhani noted, adding “Iran-Pakistan gas pipeline (Peace Pipeline) has reached near Pakistan’s border in the Islamic Republic and we hope the Pakistani side would take necessary steps in this respect.”

Sardar Ayaz Sadiq, for his part, said the development of cooperation between the ports of Gwadar and Chabahar will strengthen economic ties.

Pointing to the construction of a new communication corridor between China and Pakistan, Ayaz Sadiq called for Iran’s participation in establishing the connection route, which will provide suitable means for development of commercial exchanges in the region.

Ayaz Sadiq stressed that Pakistan needs Iran’s potential in the field of energy, especially in gas transmission, and expressed his country’s willingness to complete the Peace Pipeline project.