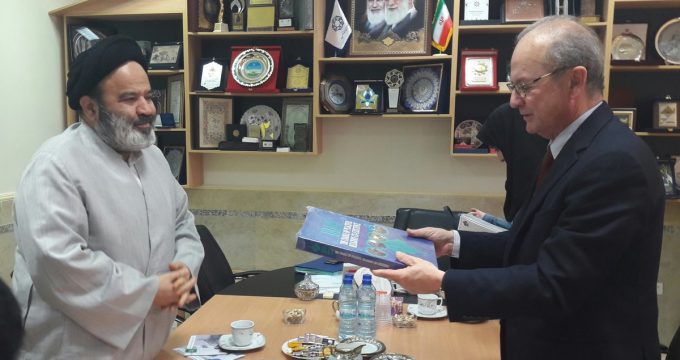 ABNA – Mr François Sénémaud, French ambassador to Iran, paid a visit to the University of Religions and Denominations in Qom, Iran on Saturday April 22. During his visit, he held a meeting with the authorities of the university while expressing his enthusiasm for his visit, the French ambassador addressed the authorities, “Your willingness to openly engage in interfaith dialogues motivated me to come here and take a close look at the ongoing activities and objectives of this university.”

“The establishment of such university in a holy city like Qom whose religious aspects are dominant serves the university’s purpose to promote interfaith dialogue and to approximate different religious sects.” The French ambassador added.

He further reiterated, “The fact that a notable figure such as Professor Pierre Louri of France is cooperating with this academic center as a faculty member in charge of the university’s publications is highly valuable since he was a student of Henry Corbin, the professor of Islamic Studies in Paris, France.”

“I’m really glad that your university is involved in academic activities on a global scale, this is what makes your center distinct from other seminary institutions.” François Sénémaud concluded.