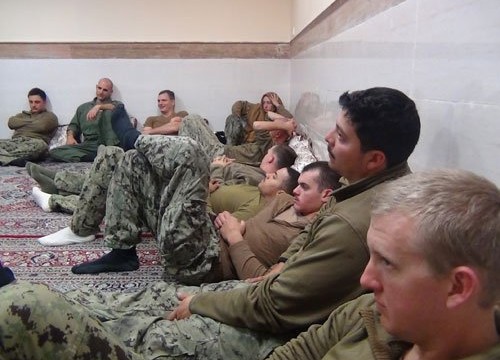 Sailor who apologized to Iran will stay in navy, board rules

Military.Com – A Navy lieutenant who tried to negotiate with his Iranian captors by allowing himself to be taped apologizing to them will be allowed to remain in uniform, an administrative board of inquiry determined this week.

Lt. David Nartker appeared before the three-member board Tuesday, accused of substandard performance and poor military deportment, attorney Phillip Lowry told Military.com. Ultimately, the board ruled that the charges were not enough to justify ending his military career. The news was first reported by Foreign Policy.

Nartker was in charge of one of two riverine command boats that inadvertently strayed into Iranian waters in January 2016 during a planned transit from Kuwait to Bahrain. When one of the boats broke down and went dead in the water, members of the Iranian Revolutionary Guard Corps approached in their own vessels and took all 10 sailors in the two boats captive.

Ultimately, all sailors were returned unharmed after less than a day of capture, but the incident was widely viewed as a propaganda victory for Iran, which used state media to circulate images of the sailors with their hands over their heads, surrendering to Iranian troops.

Also circulated was the video of Nartker apologizing on behalf of the boat crews for entering Iranian waters.

“We apologize for our mistake,” he said in the video. “That’s our fault.”

A command investigation released in June found Nartker had erred in surrendering the two boats in the first place, failing to take decisive action when challenged by members of the IRGC. The investigation found Nartker had resisted reciting scripted remarks in the hostage video, but had nonetheless violated the U.S. code of conduct for troops who are captured by apologizing at all.

Nartker believed he was negotiating for the freedom of his fellow sailors, the investigation revealed, but at that point the State Department had already secured the release of all 10 hostages.

He received a letter of reprimand at a captain’s mast administrative proceeding in August 2016, the last of four officers to face repercussions for the events that led to the sailors’ capture. Nartker appealed the punishment the same month, but ultimately his appeal was denied.

Lowry said Nartker had been accused of failure to obey a standing order, failure to prepare a paper chart, and failure to conduct a patrol brief in the administrative proceedings.

But within the command investigation was a plea for leniency for Nartker. The investigating officer found his relative inexperience, coupled with failures of oversight from senior officers, had exacerbated the difficulty of the position in which he found himself.

“His deployment to the Fifth Fleet area of operations lacked any form of oversight and he lacked basic mentorship and development from his entire chain of command,” the officer wrote. “Left to his own devices, he emulated the poor leadership traits he witnessed first-hand within his own chain of command.”

Lowry said this recommendation featured in the board of inquiry and may have contributed to the board’s decision to keep Nartker in the Navy.

“In those recommendations, it’s ‘whack, whack, whack. Oh, OK, not so fast,’ ” Lowry said. “Obviously, the investigating officer was concerned about the degree of accountability that would be had at the lowest level.”

Ultimately, he said, the system worked for his client.

“When this thing started out, there was a lot of supercharged activity in the air, presidential candidates that were talking about it,” he said. “… In the end, I knew that when all of this was said and done, it was going to come down to the decision of a few of his peers. When it went in front of the rank-and-file officership of the Navy, there was a different perspective.”

Nartker is “all in” and plans to continue to pursue a Navy career, Lowry said.