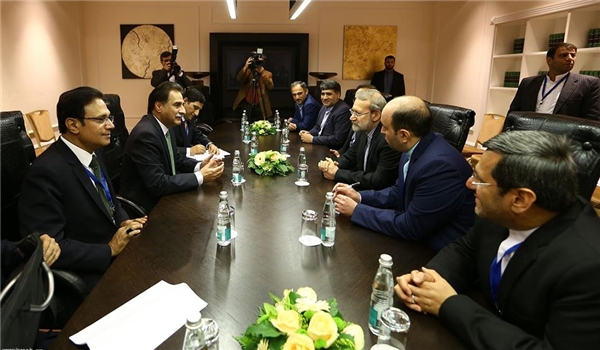 During the meeting in the Iranian capital today, Larijani and Ayaz Sadiq explored avenues for bolstering and reinvigorating of mutual cooperation between the two countries’ parliaments.

“Our parliaments have the needed capacities for expanding their cooperation,” Larijani said.

Ayaz Sadiq arrived in Tehran on Friday (April 21) for a five-day official visit to the Islamic Republic of Iran.

The Pakistani parliament speaker is visiting Iran at the invitation of Larijani who visited Pakistan in November 2014.

The Pakistani Speaker would return to Pakistan on Tuesday after completing his Iran tour.

On Tuesday, Tehran and Islamabad signed a memorandum of understanding (MoU) to broaden their relations in economic and trade fields.

The MoU was signed in a meeting co-chaired by Iranian Interior Minister Abdolreza Rahmani Fazli and Pakistani Minister for States and Frontier Regions Abdul Qadir Baluch in Tehran.

The 20th session of Iran-Pakistan Joint Economic Commission concluded in Tehran on Thursday with a memorandum of understanding on economic cooperation signed between the two sides.

The session aimed at following up the implementation of agreements reached during the 19th session held in Islamabad in December 2014, which are in line with increasing trade and commercial transactions up to $5 billion per year.