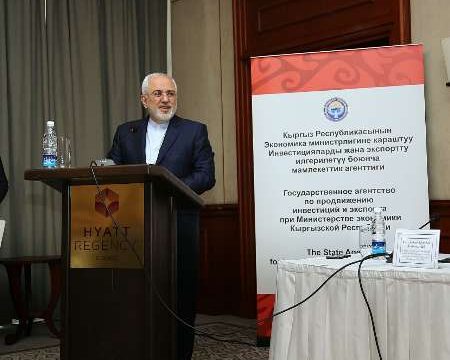 Tehran sees no limits to expansion of ties with Bishkek

“Over the past 25 years, the two sides have also held diplomatic and official ties in addition to historical ones,” highlighted the official congratulating the 25th anniversary of diplomatic relations between Tehran and Bishkek.

“Iran was among the first countries who recognized independence of Kyrgyzstan and we would never those friends who remained on our side in tough times.

He said grounds were prepared for the two countries to bolster bilateral relations thanks to President Rouhani’s visit to Kyrgyzstan in December 2016 which led to signing of several cooperation documents.

Zarif noted that he was accompanied by two high-ranking economic delegations from Iran’s  state and private sectors stating “possibilities exist to develop cooperation in fields of technology, science, energy, construction, agriculture as well as mines and industry.”

He expressed hope that the Joint Economic Forum and meetings of traders and entrepreneurs would pave the path for inking agreements and pursuing previous MoUs in line with interests of both countries.

Iran’s foreign minister said Kyrgyzstan’s development, advancement and stability were equal to those of Iran since not only do the two sides live in the same region, but also they share historical, religious and cultural bonds.

“At a turbulent time when the world is threatened by extremism and terror, collaboration and promotion of culture remain as key methods of confronting threats,” underscored the official.

At another part of his speech, FM Zarif asserted that serious steps were required in monetary and banking arenas in order to facilitate relations between entrepreneurs.

The official further voiced optimism that private sectors of Iran and Kyrgyzstan will conduct more joint activities given that central banks of the two sides have reached agreements.

Later in his one-day visit to Bishkek, Iranian Minister of Foreign Affairs Mohammad Javad Zarif will meet with Kyrgyz president and prime minister, attend and press conference and join his counterpart for an official banquet.