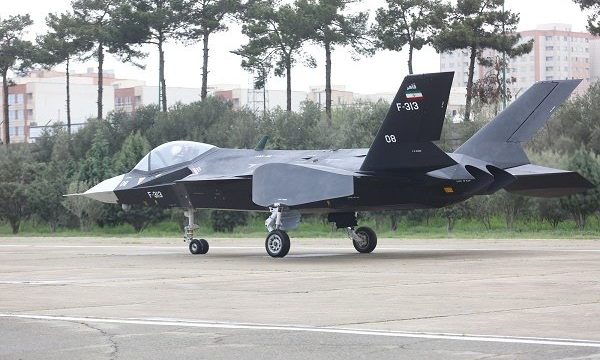 Sputnik – At a recent exhibition of Iranian defense products, Tehran offered another sneak peak of its new stealth fighter, the Qaher F-313, previously thought to be a legend. Given Iran’s record of interest toward Russian military aviation tech, Sputnik Persian suggests there is now a perfect opportunity for the two countries to combine their efforts.

On Saturday, at a military exhibition in Tehran attended by President Hassan Rouhani and Defense Minister Hossein Dehghan, Iranian aircraft designers offered a glimpse of its new Qaher F-313 stealth fighter jet, once believed to be a hoax by many Western defense analysts.

The plane’s prototype was shown taxiing along the runway in footage released by local media, although it did not take off at its unveiling.

Defense Minister Dehghan told media that the production of the Qaher F-313, together with Iran’s new Kowsar advanced training aircraft, could be seen as “a prelude to the [future] production of heavy aircraft in the country.”

The Qaher F-313, a planned Iranian single-seat stealth fighter, caused a furore when it was first unveiled in early 2013 by President Mahmoud Ahmadinejad and then-Defense Minister Ahmad Vahidi. Iranian officials have since explained that the plane is being designed to have a very low radar signature, low-altitude flight capability, be rugged and easy to maintain, and have a payload capacity of two 2,000 pound bombs, or a larger number of guided air-to-ground and air-to-air missiles.

For many years after its initial unveiling, many mostly Western analysts and journalists lampooned the plane, joking that it was a ‘model’ of a ‘cheap copy’ of American planes. Israeli analysts went so far as to call the plane a ‘hoax’.

Commenting on the Qaher F-313’s weekend taxiing demonstration, Sputnik Persian’s staff writers stressed that observers will not have to wait very long, “because Iran is very seriously and resolutely set” on accomplishing its goal of becoming a producer of combat jets. “Given the pace which Iran has set for itself in the defense sector, heavy aircraft will soon will soon go on display, and then step into service” with the country’s armed forces, they added. “After all, Tehran considers it extremely important to strengthen and replenish its defense-industrial complex.”

Furthermore, Sputnik Persian noted, “although Iran has set itself the goal of creating its own ‘combat king of the skies’, it is not averse to working with a reliable and long-standing partner in the area of military-technical cooperation – Moscow, in the future.”

Emad Abshenas, political analyst and editor-in-chief of the Iran Press newspaper, told Sputnik Persian that the Iranian side’s strong interest in Russian military aviation technologies and the existing successful cooperation between the two countries in the defense sector can be combined. “The result may even be the joint production of export models of military aircraft,” Abshenas said.

“Cooperation between Iran and Russia became a a genuine and active strategic partnership a long time ago,” the observer explained. “During his recent visit to Moscow and his meeting with President Vladimir Putin, President Rouhani stressed the need to develop cooperation in the production of weapons. As we are well aware, Russia has a very rich experience in this area. The Russian defense industry has some of the most advanced weapons in the world among its assets. Naturally, Iran is interested in using Russia’s experience, its technologies and assistance in the creation of weaponry.”

Furthermore, the analyst recalled, “at the moment, negotiations are already underway on the manufacture modern tanks and Russian combat aircraft in Iran. I think that in the very near future we will see this coming to fruition. Such cooperation not only satisfies the needs of Iran’s defense complex, but will be an excellent opportunity to export Russian weapons to other countries through Iran.”