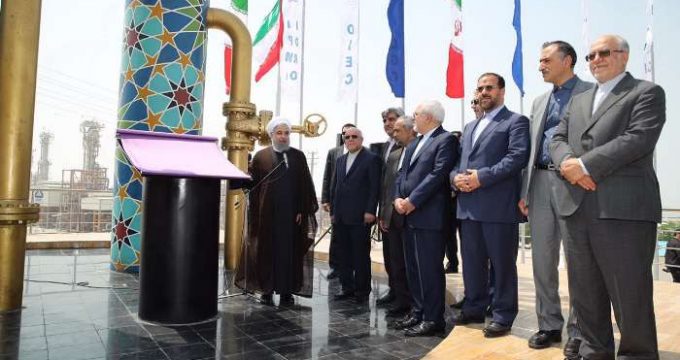 SHANA – Iranian Minister of Petroleum Bijan Zangeneh says the petrochemical sector is the most effective industry for tackling poverty in Iran.

Addressing a ceremony to launch 4 petrochemical projects in Iran’s oil and energy hub Assalouyeh on Sunday, said the petrochemical industry is an integrated value-generating collection which is most effective in tacking poverty in the country.

He said converting natural gas into value-added products is a determining developing for the region’s economy.

The official called on domestic investors to choose the petrochemical sector as their investment destinations, saying investment in the sector would ensure a bright future for the industry.

He also said that Kaveh Methanol mega project, the world’s biggest methanol production unit, will be officially inaugurated in a matter of a month, adding 2.5 million tons to Iran’s annual petrochemical output.

“The projects set in motion today will complete the value chain in the region,” he added.

He said Kavian Petrochemical Plant, located south of Iran, with a production capacity of 2 million tons of ethylene per day, will be key in completion of the petrochemical value chain to petrochemical plants in the northwestern cities of Tabriz and Urmia.

Kavian injects ethylene to the West Ethylene Pipeline that stretches from south to western provinces of the country to northwestern province of Azerbaijan.

“Iran can become the region’s number-one power in production of petrochemicals and downstream industries,” he said.

Phase II of Kavian Petrochemical Plant is the biggest supplier of ethylene in the Middle East and has been built for production of over a million tons of ethylene annually. The unit will feed West Ethylene Pipeline which delivers feedstock to 12 petrochemical plants in western Iranian provinces.

Fed by ethane recovered from various phases of the supergiant South Pars Gas Field in the Persian Gulf, the facility is constructed with an investment of €200 million and IRR 2,350 billion. It is estimated to sell $950m/y of petrochemicals.

Financed by €40m and IRR 1,350b, Takht Jamshid Pars will be able to supply 55,000 tons/year of polystyrene once its production hits full tilt. It is estimated to sell $85 million of petrochemicals.

Polystyrene Unit of Entekhab Industrial Group is financed by nearly $120m and IRR 2,000b and can supply 250,000 of polystyrene annually. It is planned to be fed by 235,000 tons/year of styrene supplied by Pars Petrochemical Plant. The facility will fetch roughly $385m/y for the country by its activities.

MEG Unit of Morvarid Petrochemical Plant is the last project that will come on stream next week by the president.