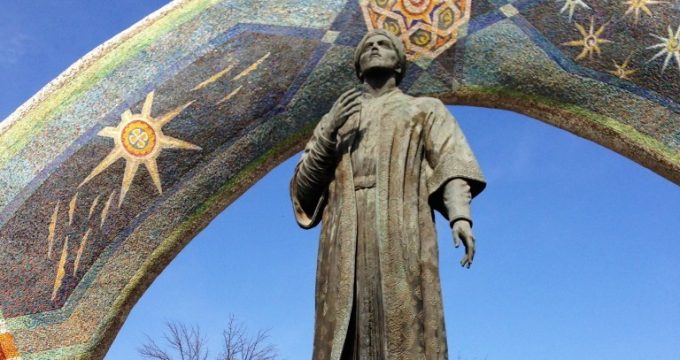 ‘Rudaki and 1,000 Years of Persian Poetry’ published in Kazakhstan

Financial Tribune- A book ‘Rudaki and 1,000 Years of Persian Poetry,’ containing the articles presented at a 2008 seminar with the same title in Almaty, has now been published in Kazakhstan.

Compiled in Russian language by Tajik Iranologist Safar Abdullah who resides in Kazakhstan, the book also includes Persian articles which have been translated into Russian. The publishing house of Olzhas Library in Almaty has released the work.

The contents include articles presented at the international conference  ‘Rudaki and 1,000 Years of Persian Poetry’ held on November 4-5, 2008 in the Kazakh capital Almaty, according to the website of the Academy of Persian Language and Literature in Iran (persianacademy.ir).

Researchers and scholars from Iran, Russia, Tajikistan and other Central Asian nations participated in the conference. The international event was hosted by Suleimanov Institute of Oriental Studies and cultural-research department of Mukhtar Auezov Museum.

It was aimed to encourage studies and researches on Rudaki (858-941), the Persian poet whose complete name is Abu Abdollah Jafar Muhammd Rudaki. He is regarded as the first great literary genius of modern Persian language, hence, also known as ‘Adam of Poets.’

Rudaki’s seminal role in the culture of Iran and his birthplace Tajikistan was highlighted at the conference. A major part of the lectures delivered by Iranian researchers are published as articles in the 379-page book.

The book has an introduction by Safar Abdullah and contains the following articles: ‘Father of Persian Poetry’ by Iranian philosopher and master of mystic literature Asghar Dadbeh who is the director of literature section at The Great Islamic Encyclopedia; ‘Is Rudaki Really the Adam of Persian Poets?’ by Iranian expert in sociology of literature, literary researcher and critic Ali Mohammadi; and ‘Rudaki and Research in Poetry Style’ by Tajik author, essayist and master of classical literature Abdul Nabi Sattarzadeh.

Other articles are ‘Rudaki and Arabic Literature’ and ‘A Few Significant Points in Understanding Rudaki’s Poems’ by Tajik writer and essayist Abdul Mannan Nasruddin; ‘Rudaki’s Role in Development of Music’ by head of Tajik National Conservatory Faraghat Azizi; ‘About Poetic Thinking and Characteristics of Rudaki’s Poetry’ by Uzbek scholar Qurban Muhammadov; and ‘Rudaki and Kazakh Literature’ by Kazakh literary researcher Utigin Kumisbayev.

In addition, the author of the book, who is associate member of the Academy of Persian Literature and Language, has included a few other articles by scholars who were not present at the 2008 confab.

According to Safar Abdullah, although there are already a number of research books in separate publications about Rudaki and his works, “the field of studies on Rudaki is just taking the first steps, and such scientific and research collections are indispensable to the field.”

The work provides a new perspective to the studies on Rudaki, particularly for Russian scholars, he said.