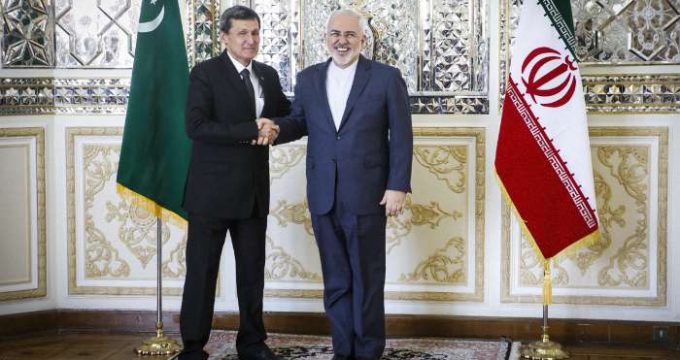 Zarif in Central Asia as Iran seeks to fire up economy

Press TV – Foreign Minister Mohammad Javad Zarif has started touring Central Asia and the Caucasus to boost Iran’s ties with three major countries in the region, especially in the field of economy.

The three-day tour spans Turkmenistan, Georgia, and Kyrgyzstan. A 20-member delegation of businessmen and company representatives is accompanying Zarif who cited transit cooperation among the objectives of the visit.

“There is a possibility for transit cooperation with Georgia to link the Black Sea to the Persian Gulf and the Indian Ocean which is a very favorable way for the future of transit and the North-South Corridor,” he said.

Zarif made the remarks as he landed in Ashgabat on Sunday and was received by Turkmenistan’s First Deputy Foreign Minister Vepa Hajiyev.

The International North-South Transport Corridor (NSTC) was formalized among India, Iran and Russia in 2000 to link the Subcontinent and the Middle East to the Caucasus, Central Asia and Europe.

Besides Iran, India and Russia, countries that are on board to integrate into the transit network include Armenia, Azerbaijan, Belarus, Kyrgyzstan, Kazakhstan, Ukraine, Turkey, Tajikistan, Oman, Syria and Bulgaria.

Zarif has already said the countries involved were discussing the “final details” of the project. Dry runs of the route were conducted in 2014, from Mumbai to Baku and Astrakhan via Bandar Abbas.

The NSTC opens a window for alignment with Silk Road Economic Belt pushed by China to establish new trade and transport links with Central Asia and Europe and provide a counterbalance to US “pivot” to Asia.

Before his talks in Ashgabat, the Iranian minister said his talks were aimed at reinforcing the bilateral ties among other things. “Enhancement of relations with neighbors has always formed the Iranian foreign policy’s most important priority,” he said.

Iran, Zarif said, also sought to pave the way for increasing its non-oil exports as well as technical and engineering services to the neighbors, and follow up on the memoranda of understanding already signed with them.

Zarif touched on the Iranian foreign ministry’s plans to help revitalize the country’s economy, saying exports of technical and engineering services to neighbors were one of the subjects which his delegation sought to bring up in the talks.

Leader of the Islamic Revolution Ayatollah Seyyed Ali Khamenei named the new Persian year as “the year of production and employment and “the Foreign Ministry has been taking measures to help in their regard,” he said.

Zarif also touched on common threats to the regional countries and the need for collective efforts to confront them.

“Our region is faced with the threat of extremism and terrorism from all sides and we need close cooperation with the regional countries,” he said.

central asian countries, economy, Mohammad Javad Zarif April 17, 2017
Trump isn’t sure what to do next on Syria. Congress has some ideas.
Iran-Pakistan trade volume expandable to $5bn