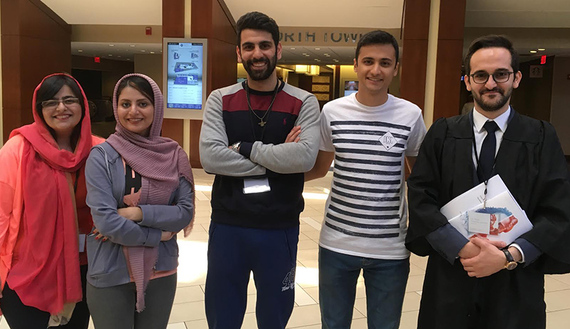 At US competition, Iranian law students ‘surprised’ by reception

Even though their team didn’t make it into the finals, the Iranians — five who made arguments, a coach and one former participant who served as a judge — told Al-Monitor they were thrilled just to have gotten visas.

Twice, US courts have stayed efforts by the Donald Trump administration to restrict entrance by nationals of first seven, then six primarily Muslim nations, including Iran. However, the US State Department has continued to process some visas for Iranian athletes and others seeking to travel here for academic and cultural exchanges.

The Iranian law students told Al-Monitor they are gratified by the warm reception they have received.

“What makes me enthusiastic about the whole process is that I’m meeting everyone from all over the world,” Bahar Babapour, 18, told Al-Monitor. “The Americans are really showing that what they think of Iranians is different from what their lovely president thinks of us. They know there are bad people and good people in all countries and that if we are here for this competition, we cannot be one of the bad ones.”

In Iran, unlike the United States, students can opt to study law as undergraduates. Babapour, who is from Dezful in southern Iran, is a freshman at Allameh Tabataba’i University in Tehran. Her team was one of two in Iran that qualified for the Philip C. Jessup International Law Moot Court Competition, which has attracted law students around the world for 58 years.