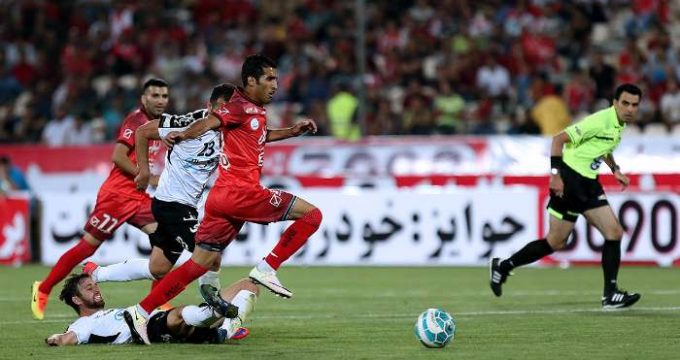 The Tehran-based giants defeated Machine Sazi, which sat rock bottom of the Pro League table with just sixteen points on the board from 27 games, 2-0 at the multi-purpose Yadegar-e-Emam Stadium in Tabriz on Saturday, and put an end to a nine-year title drought.

The red-clad Perspolis players started the match in a dominant fashion. Striker Mehdi Taremi was through on goal with only Machine Sazi goalkeeper to beat very early into the game, but failed to find target.

The 29-year-old Perspolis midfielder Vahid Amir then picked the ball and passed it to teammate Ali Amiri, who scored into an empty goal.

Amiri took up another suitable chance to double his team’s lead in the fifth minute, but a tackle by Machine Sazi defender simply ruined the opportunity.

In the 7th minute, Taremi committed a faux pas in yet another one-on-one with Mehdi Eslami. He kicked the ball against the goalie’s feet, leaving Perspolis fans stunned to rue the wasted golden opportunity.

The hosts could not find the target to level the score later on, and Perspolis led 1-0 at the end of the first half.

After the breather, Perspolis players had more vigor and valor, and heaped pressure on the opponents’ goalpost.

They were awarded a corner in the 49th minute, but did not manage to place it into the net.

In the 69th minute, Alipour was brought down in the penalty area and Taremi converted the kick into Perspolis’s second goal.

Perspolis claimed its first Persian Gulf Pro League title at the inaugural edition of the competition in the 2001-02 season. The Reds were crowned for the second time in the 2007-08 season.