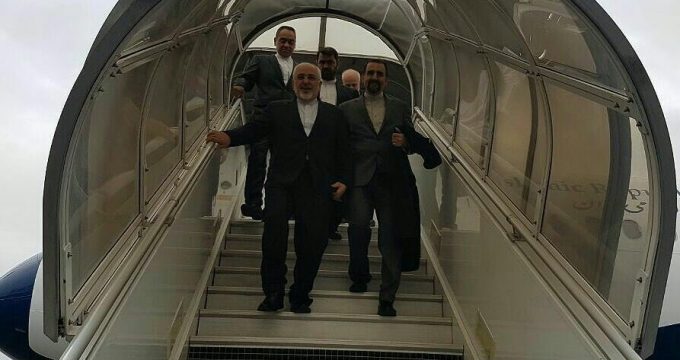 IRNA – Iranian Foreign Minister Mohammad Javad Zarif arrived in Moscow on Friday morning to attend tripartite talks with his counterparts from Russia and Syria to review recent developments in Syria.

The visit is taking place upon an invitation by Russian Foreign Minister Sergei Lavrov.

Moscow trilateral talks are basically focused on discussing the latest developments in Syria as well as the three states approaches for convergence on finding a diplomatic solution for the Syrian crisis.

Last October, foreign ministers of Iran, Russia and Syria met in Moscow which led to a series of intra-Syrian talks in Astana, Kazakhstan.

During their October talks, the three foreign ministers stressed the need for relentless fight against terrorism, efforts to be made for resumption of Geneva talks on Syria which were halted at that time due to sabotage made by certain Western-Arab countries which supported the armed and anti-Syrian terrorist groups.

The trilateral talks of Tehran, Moscow and Damascus in October 2016 led to their cooperation on fight against terrorism in the region, the Syrian terrorists in particular.