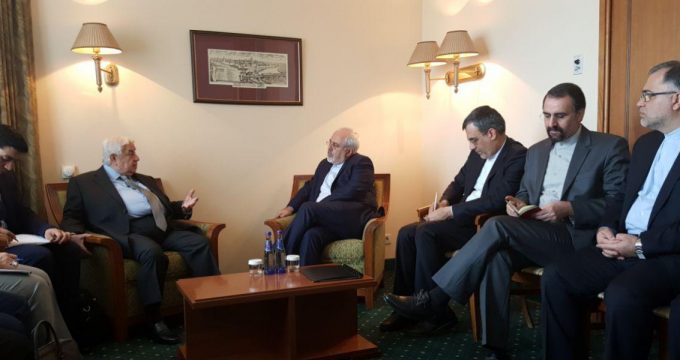 Tasnim – Iranian Foreign Minister Mohammad Javad Zarif and his Syrian counterpart Walid al-Muallem met in Moscow on Friday for talks on a recent US military strike in Syria.

Zarif arrived in Moscow on Friday morning for what he called the necessity for a meeting to coordinate policies between Iran, Russia, and Syria, as three allies, in the wake of the April 7 US attack on Syria.

In the bilateral meeting, Zarif and Muallem discussed the latest development in Syria, which has been beset with crisis since 2011.

The two diplomats also talked about the US unilateral move to launch a missile attack on the Syrian government’s Shayrat Airfield near Homs under the pretext that a suspicious chemical attack had occurred in the town of Khan Shaykhun in Idlib.

In his contacts with the foreign officials, Zarif has reiterated the need for the formation of a fact-finding committee to probe into the chemical attack near Idlib.