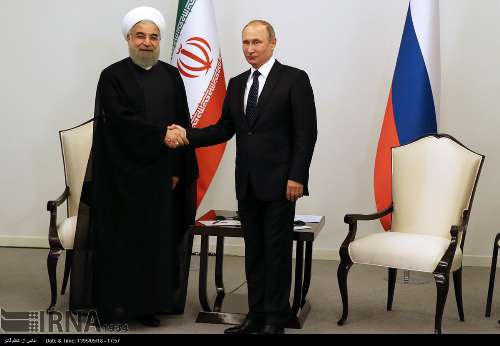 How US strikes could bring Tehran, Moscow closer

Al-Monitor | Saeid Jafari: Iran’s relationship with Russia has always been characterized by a mix of hope and dread. While one faction in Tehran wants to expand ties, another faction has been traditionally concerned about Moscow’s trustworthiness. The Syrian crisis has, however, brought the two countries closer together given their shared support for President Bashar al-Assad.

Despite the current collaboration, there is constant concern that Russia might turn its back on Iran for a better deal, or that Moscow might maneuver in Syria in a manner that will not safeguard Iran’s interests in the region. The latest boost to this anxiety came from Israeli Prime Minister Benjamin Netanyahu’s recent attempts to attract Russia’s attention. Netanyahu’s March 9 visit to Moscow was conducted with the hope of getting President Vladimir Putin’s approval for Netanyahu’s vision of the future order in Syria, which directly impacts the Iranian-Israeli dynamic.

At his meeting with Putin, Netanyahu charged that Iran is spreading “Shiite Islamic terrorism” and urged Moscow to not let Tehran use the Syrian crisis to further its goals against Israel. For his part, the Russian president urged the Israeli prime minister to avoid finding roots to current tension with Iran in “the fifth century B.C.” and to instead focus on current realities. Naturally, Netanyahu’s visit was carefully watched by Tehran, with Iranian Foreign Minister Mohammad Javad Zarif responding to the charges of the supposed historical enmity of Persians toward Jews on Twitter on March 12.
Read more here

Iran-Russia ties, US missile attack on Syrian airfield April 12, 2017
Russian foreign minister scolds US Secretary of State Tillerson over Syria during Moscow visit
‘$64 question: Where is US evidence Assad behind Idlib chemical attack?’