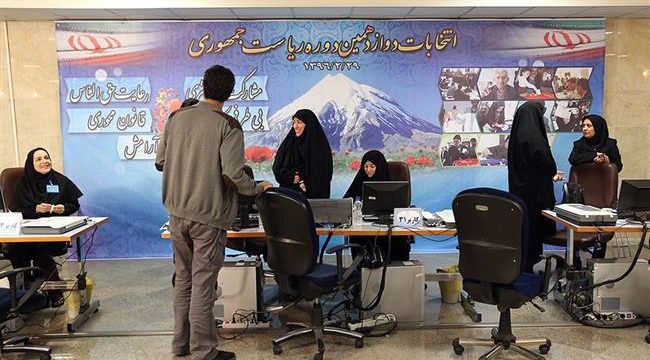 Press TV – Volunteers from across Iran have started registering to contest the country’s 12th presidential election.

The registration process began at the country’s Election Office, which is located within the Interior Ministry’s premises in Tehran, on Tuesday, and will last for the next five days.

The election is scheduled for May 19.

The candidates are expected to be political and religious personages who fulfill the fourfold criteria of being of Iranian origin, being a national of the Islamic Republic, being prudent and capable of taking on leadership duties, and being religious and believing in the Islamic Republic’s principles and its official religion.

All hopefuls will be vetted by the Guardian Council, which will announce the names of qualified candidates possibly in late April.

The two main rivals in the race are widely expected to be the incumbent, President Hassan Rouhani, and Ebrahim Raeesi, the chief custodian of Astan Quds Razavi, the organization managing the affairs of the holy shrine of Imam Reza, the eighth Shia Imam, in the city of Mashhad.

While President Rouhani has not officially announced his will to run for a second term, he is widely expected to do so, and the reformist camp in Iran has already picked him as its chosen candidate. But President Rouhani has not explicitly professed affiliation to either of the two main camps in Iranian politics — namely the reformist and the principlist camps — and has been promoting his own brand of moderation as a potential alternative and an intersection of rival political trends.

Raeesi, on the other hand, is commonly believed to belong to the principlist camp, although he, too, has sought to run on an independent basis. He announced his candidacy on Sunday.

Raeesi would rely on his past record in high government posts and his managerial skills to win votes.