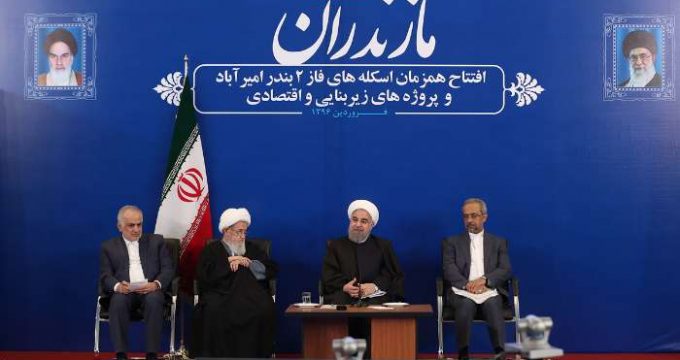 President calls for huge voter participation in May 19 elections

IRNA – President Hassan Rouhani on Tuesday called on the Iranian people to maintain an outstanding participation in the upcoming May 19 presidential and city council elections.

President Rouhani made the remarks in an inaugural ceremony held for introducing 43 development and infrastructural projects in the northern province of Mazandaran.

“We are now in a critical situation and we should show our unity and power to the world, “the President said.

Rouhani urged respecting ethics and upholding moral values in the election campaigns and said that the angels of ethics and peace should not be victimized.

“The election campaigns in Iran are different from the similar campaigns in the European or American countries because we are living in an Islamic country under the umbrella of Velayat-e Faqih (Guardianship of the Islamic Jurist), the Founder of Islamic Republic and we remain to abide by the Constitution,” the President said.

The registration of candidates for Iran’s presidential elections kicked off in the Interior Ministry headquarters on Tuesday morning.

Head of the Islamic Coalition Party’s Central Council Mostafa Mirsalim was the only prominent political figure, who registered his name on Tuesday morning to run for the next presidential election.

The time for registration will end on April 15, and the Guardian Council will start the vetting process April 16.

The 12th presidential elections, the 5th city and village councils as well as the parliamentary run-off for some constituencies will be held on May 19.