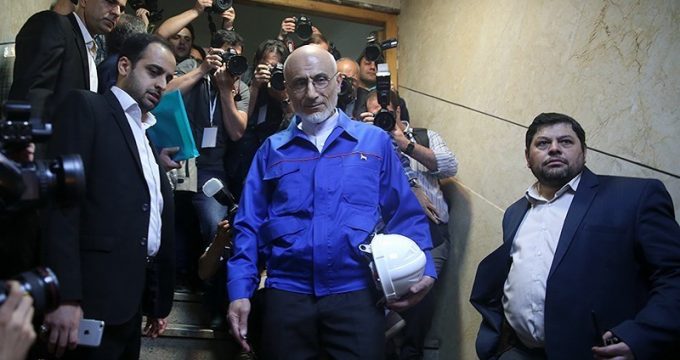 IRNA – Head of the Islamic Coalition Party’s Central Council Mostafa Mirsalim registered his name on Tuesday morning to run the next presidential election to be held in May 19, 2017.

Talking to reporters at the Elections Headquarters, Mirsalim underlined that he represents the ICP and is not the representative of Popular Front of Islamic Revolution Forces.

The Popular Front of Islamic Revolution Forces is a political organization founded in late 2016 by ten figures from different principlist political parties including the ICP.

Mirsalim, 69, is a conservative politician and engineer who served as the country’s minister of culture and Islamic Guidance from 1994-1997.

From 1981 to 1989, he served as the advisor to then president Ayatollah Seyyed Ali Khamenei.

The registration of candidates for Iran’s presidential elections kicked off in Interior Ministry headquarters on Tuesday.

The time for registration will end on 15 April and the Guardian Council will start vetting the registered candidates on 16 April.

The Guardian Council will start surveying the candidates’ qualification on April 16 and the final list of candidates will be announced by the Interior Ministry on 26–27 April.

Election campaigns for the eventual candidates will officially begin on 28 April and end on May 17.

The 12th presidential elections, the 5th city and village councils as well as the parliamentary run-off for some constituencies will be held on May 19.

Per Article 115 of Iran’s Constitution and Article 35 of the Elections Law, the President of the Republic must be elected from among the religious and political elite who meet the following qualifications: Iranian origin, Iranian nationality, administrative leadership, clear past record, honesty and piety, believing in the fundamentals of the Islamic Republic of Iran and the official religion of the country.