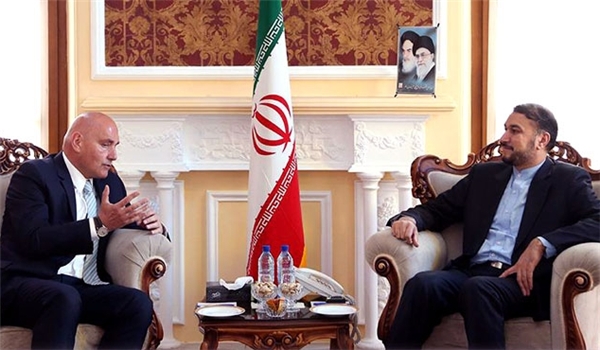 “The US missile attack on Syria is against the principles of international law and ignores the internationally-recognized mechanisms,” Amir Abdollahian said in a meeting with Switzerland’s Ambassador to Iran in Tehran on Monday.

He reiterated that the US missile strikes against Syria would encourage the ISIL and other terrorist groups in the region to continue their massacre of civilians in addition to the escalation of insecurity in the region which is contrary to the campaign mottoes of US President Donald Trump.

Amir Abdollahian, meantime, pointed to the growing trend of Tehran-Bern parliamentary cooperation, and said, “Given that the employment rise and the domestic production are among the Islamic Republic’s priorities, Tehran welcomes the increase in consultation and cooperation between the economic and trade Commissions of Iranian and Swiss Parliaments to facilitate cooperation of public and private sectors of the two countries.”

Julio Hass, for his part, expressed satisfaction with the growing trend of bilateral parliamentary ties between the two countries and said Swiss parliament is ready to develop relations with Iranian sides.

He, meantime, pointed to the Syrian crisis, and said, “Despite several meetings held between key players to politically solve Syrian crisis, conflict of interests has made little progress achieved.”

“Some parties believe that the solution of crisis in the region is not possible in the short term and would need in more time,” he added.

Dozens of people were killed in a chemical attack in the Syrian town of Khan Sheikhoun in the Northwestern province of Idlib on Tuesday.

The United States and its allies were quick to accuse the Syrian government forces of carrying out the attack. The Syrian army said, however, that “it has never used them (chemical weapons), anytime, anywhere, and will not do so in the future.”

The US warships deployed to the Mediterranean Sea carried out an airstrike on an army airbase near Homs by firing some 60 Tomahawk missiles at the Shayrat airfield southeast of Homs early Friday.