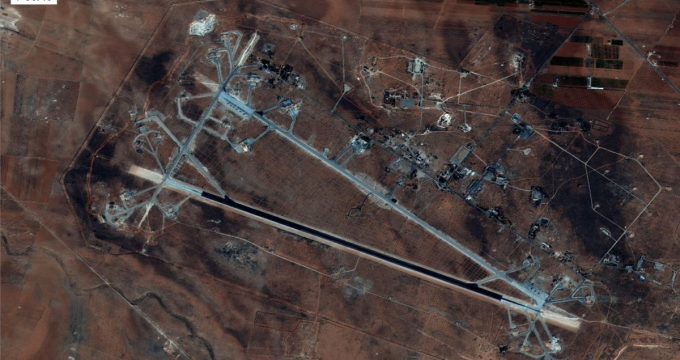 Press TV – Residents of Syria’s Shayrat village targeted in a recent US missile strike on a nearby airfield with the same name say the aggression has killed civilians and destroyed or severely damaged their homes.

Standing next to a missile crater and holding the shrapnel of the American missiles, villager Assad al-Khodr recounted how rockets landed 40 meters from his house during the Shayrat Airbase’s shelling,

The attack caused casualties among the civilians in Shayrat and nearby villages and damaged homes, he told French news agency AFP on Saturday.

“This shameless aggression, which was conducted by the Americans, which their terrorists – which are supported by them – were not able to do it for them in the area, caused the panic of children and civilians and huge damages in this village and the other surrounding villages, broken glass and shop facades,” another resident said.

The resident, however, was pleased that the airfield which is a frontline combat center in Syria’s battle against foreign-backed militants had resumed operation.

“This is a huge challenge to America and their allies and we gave martyrs and will keep giving martyrs. We will never hesitate in giving more martyrs for our country,” he pointed out.

US warships in the eastern Mediterranean launched a barrage of 59 Tomahawk missiles against Shayrat Airfield in Syria’s Homs Province on Friday. Six Syrian soldiers and nine civilians were reported to have been killed in the assault.

The Russian Defense Ministry assessed the efficiency of the US strike as “quite poor” and said only 23 out of 59 Tomahawk missiles had reached their target while the points of impact of the remaining 36 missiles were unknown.

US President Donald Trump said he had ordered the strike and alleged that the airbase was the origin of Tuesday’s suspected chemical attack on the town of Khan Shaykhun in Syria’s Idlib Province.

Washington has failed to provide any proof that the Syrian government was behind the purported gas attack, with Damascus categorically denying the US accusation.

The US attack came in the wake of the Syrian army advances against foreign-backed militants on different fronts and ahead of fresh push for peace talks, while President Bashar al-Assad is widely seen as holding the balance of power in the talks, as well as on the battlefield.

On the battle ground, a fourth group of militants and their families left the last militant bastion in the Syrian city of Homs on Saturday under a Russia-backed agreement reached recently with the government.

Syria’s official SANA news agency reported that at least 242 militants had left al-Waer along with their families.

Homs Governor Talal al-Barazi said as many as 400 militants and their relatives were expected to leave on the day, noting that the evacuations would continue until the end of the month.

The first and the second phases of the evacuation process took place in March while the third one happened this month. The evacuees were transported to militant-held areas in Syria.

The so-called Syrian Observatory for Human Rights estimates that a total of 12,000 people, including 2,500 militants, will leaver al-Waer under the deal struck between Syria’s warring sides on March 13.

The agreement allows safe passage for the militants and their families from al-Waer and paves the way for Damascus to retake the state institutions there.