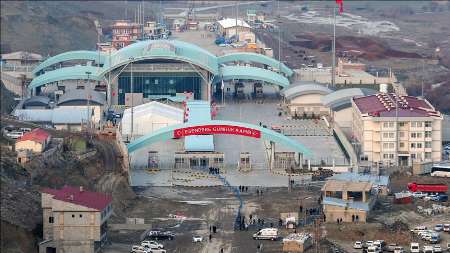 IRNA— Esendre-Sarv as the third big border crossing between Turkey and Iran which has been modernized was opened on Friday by Turkish Prime Minister Binali Yildirim.

The border crossing as the third trade gate between Iran and Turkey in Yuksek Avai in Hakkari Province will be more active compared to the past, said Turkish Customs and Trade Minister Bulent Tufenkci in the opening ceremony.

He added that the crossing would expand the trade ties between the two countries, and after activation, the gate would boost tourism sector of the province as well.

‘Iran is among the countries we have the most export-import exchanges with and such crossings would facilitate the economic ties’, he said.

Pointing to the average 90,000 automobiles and more than 400,000 people who crossed the border last year, Mr. Tufenkci said that beside the border trading, the traffic through the crossing would also enhance the economic exchanges.

Iran and Turkey with 550 kilometers of common border have two more official crossings that are called Razi-Kappikoy and Bazargan-Gürbulak.