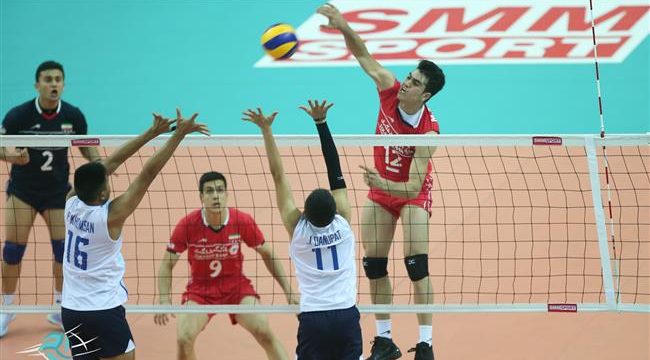 Press TV- The Iran men’s national under-19 volleyball team will be taking part in the fifteenth edition of the Fédération Internationale de Volleyball (FIVB) Volleyball Boys’ U19 World Championship in Bahrain, after brushing off Thailand in the Asian Youth Boys Volleyball Championship.

On Monday, defending and seven-time champion defeated Thailand 3-0 in comfortable straight sets (25-16, 25-19 and 25-19) at the Wunna Theikdi Indoor Stadium in Myanmar’s capital city of Naypyidaw.

The Thais could recover composure after conceding two sets in a row, and managed to catch up with the Iranians at 13-13 and again 17-17.

However, the determined Iranian outfit showed no sign of capitulation, and Morteza Sharifi and Ali Tabari combined well in firing aggressive attacks that the Southeast Asians found too difficult to cope with. Iran captured the set 25-19 and won the match.

“It’s good to win this match because it was a very important match to give us life or death. To qualify to the World Championship is our main target and we did it at last. We did not underestimate any team although we learned that we are playing weaker teams like Thailand. To win each match in this level of competition is very important because these generations will have a chance to compete in the future’s Olympics,” Iran’s head coach Mohammad Vakili said after the match.

He added, “After we lost to South Korea and China, we tried to learn from the mistakes we made. In this match, we tried to reduce our mistakes. As I said, our first target is to qualify for the world meet and we had accomplished it. Our second goal is to defend our title. From Tuesday, we have a plan for the World Championship. The semi-finals and maybe, the final match in this championship, for us will serve as tune-up matches ahead the World Championship. However, I admit that our next match against Korea will be very hard. I won’t worry about the match, anyway. Korea will worry.”

The 2017 Asian Youth Boys Volleyball Championship opened on March 28 in Naypyidaw, Myanmar, and will wrap up on April 5.

The tournament serve as the Asian qualifiers for the 2017 FIVB Volleyball Boys’ U19 World Championship, scheduled to be held in Bahrain. Only the four top-ranked teams will qualify for the world championship.