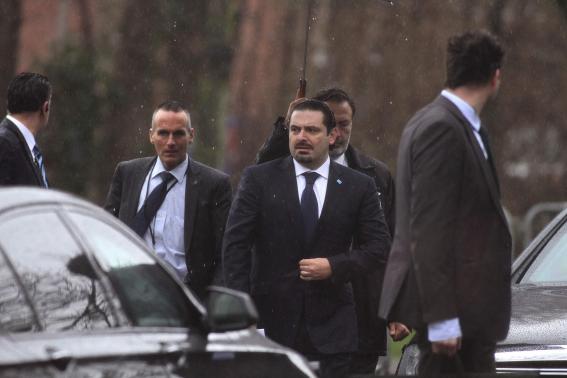 In an interview with France24 TV station after arriving in Paris on Sunday, Hariri also dismissed concerns that Hezbollah might provoke a conflict with Israel.

“I think that Israel is the one that wants to launch a war against Lebanon, and not Hezbollah,” he said.

“Israel does not want the Arabs to rest. Look at the daily Israeli violations of our airspace, land and territorial waters,” Hariri added.

The system became operational amid heightened tensions along northern borders with Lebanon and Syria. Prime Minister Benjamin Netanyahu said the missile system was meant against the “existence” of those who allegedly sought to destroy Israel.

Last month, Israeli warplanes struck several targets in Syria, drawing retaliatory missile fire from Syrian forces, in the most serious incident between the two sides since the start of war in Syria in 2011.

After the retaliation, Israeli minister of military affairs Avigdor Lieberman threatened to destroy Syria’s air defense systems “without the slightest hesitation” if such an incident were to happen again.

Israel has carried out strikes within Syrian borders to stop what it says are deliveries of advanced weapons to Hezbollah which is fighting Takfiri terrorists in the Arab country. The Israeli assaults, however, have often followed Syrian army advances, raising suspicions of Israeli attempts to change the tide in favor of militants.

Tel Aviv has also escalated its aggressive rhetoric and military incursions into southern Lebanon, prompting President Michel Aoun to warn that any Israeli attempt to violate his country’s sovereignty would be met with an “appropriate response.”

Israeli Education Minister Naftali Bennett said last month “life in Lebanon today is not bad” compared to Syria, adding Tel Aviv should target civilians in a future war with the country and send it “back to the Middle Ages.”

Israeli threats forced the Lebanese government to task Foreign Minister Gebran Bassil with preparing a report for the UN Security Council regarding a potential conflict.

Bassil was asked to prepare a “list of Israeli stances in media and a detailed letter to the Security Council to press the international community to uphold its responsibilities in the face of the intentional and public escalation [of the threat] to the region’s stability.”