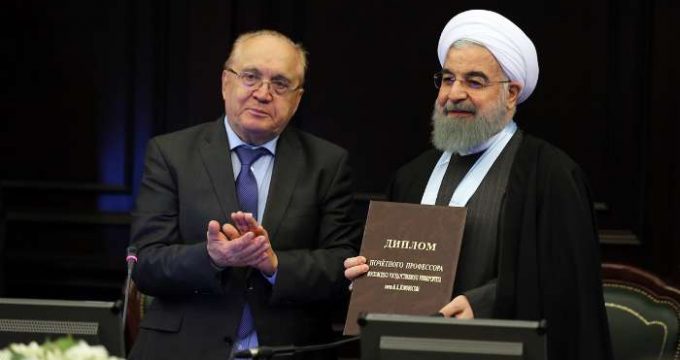 Press TV- Iranian President Hassan Rouhani regrets that the world is witnessing a rise in extremism, emphasizing the need for a “strong will” in the international community to uproot terror and violence.

“Unfortunately today, we are witnessing the growth of violent extremism in the world,” Rouhani said in a speech at Moscow State University on Tuesday upon receiving an honorary doctoral degree.

“Islamophobia, racism and Takfiri ideologies have, in effect, joined one another and risen up to challenge peoples’ integrity and to feed violence and extremism,” Rouhani noted.

The Iranian president further pointed to his 2015 proposal to the UN, World Against Violence and Extremism, and said “the need for a global will to eliminate violence and extremism is today felt more than ever before.”

That proposal, known as WAVE, was drafted and tabled in the form of a resolution at the General Assembly, which adopted the text in December 2013.

The solution to the regrettable situation, he said, “is to first exercise tolerance and self-restraint, and then expand multilateral and honest talks, which feature respect for all countries’ interests.”

“Let us turn compulsion into choice, imposition into tolerance, humiliation into dignity, and violence and extremism into kindness and broad-mindedness,” Rouhani stated.

The Iranian chief executive hailed successful Russo-Iranian cooperation in battling terrorism in Syria, saying it was high time that all regional countries helped enable the return of refugees to their homeland.

The decline, which has befallen the West’s dominance over the world, and also the demise of monopoly over the world’s wealth, power and technology has brought about a “historical opportunity” for nations to set up “new international foundations,” said the Iranian statesman.

Such structure has to turn the world into a safer place for all by using common human values as its basis, Rouhani added.