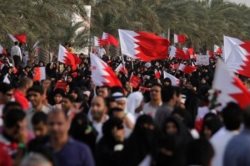 Bahrainis rally in solidarity with victims of regime crackdown

Press TV – Bahrainis have staged several rallies across the Persian Gulf kingdom in solidarity with the activists killed at the hands of Manama regime forces.

The protesters took to the streets in the villages of Musalla, Buri, Diraz and Sanabis on Monday evening, chanting slogans against the Al Khalifah regime.

They were also carrying photos of the victims of the regime’s crackdown, including Mohammed Sahwan who died in Manama’s custody last week.

Bahrain’s Interior Ministry announced the death of the 45-year-old prisoner in a Tweet on March 16, citing “natural causes.” Sahwan was serving a 15-year sentence at Jaw prison for taking part in anti-regime demonstrations.

However, his relatives said the man had lost his life as a result of injuries sustained during the 2011 crackdown on rallies against the ruling Al Khalifah dynasty. They said that Sahwan still had buckshot in the head and body.

Sahwan was arrested in November 2011 and was handed down the jail term in May 2012.

The Bahrain Center for Human Rights said he had been tortured to confess to various crimes. Sahwan himself had said in 2012 that a police officer had forced him to sign a fake confession.

The demonstrators on Monday called on Manama to bring those behind the killings to justice, vowing to continue their protests until their demands are met.

Bahraini regime forces fired toxic gas to break up the gatherings in Sanabis and on Sitra Island, south of the capital, Manama, on Monday.

Anti-regime protests have been held on an almost daily basis ever since the popular uprising roared into life in 2011.

Manama has gone to great lengths to silence dissent. In March 2011, troops from Saudi Arabia and the United Arab Emirates were deployed to assist Bahrain in its crackdown.

Scores of people have lost their lives and hundreds of others sustained injuries or been arrested since then.