A look at Iranian newspaper front pages on March 16

IFP – IFP has taken a look at the front pages of Iranian newspapers on Thursday and picked headlines from 17 of them. IFP has simply translated the headlines and does not vouch for their accuracy.

A top story today was the sudden death of renowned Iranian lyricist Afshin Yadollahi in a car accident near Tehran.

Newspapers also covered the upcoming presidential and city council elections, and the plans by reformists and conservatives to win the majority.

2- Ex-Chief of IRIB Zarghami to Run for President 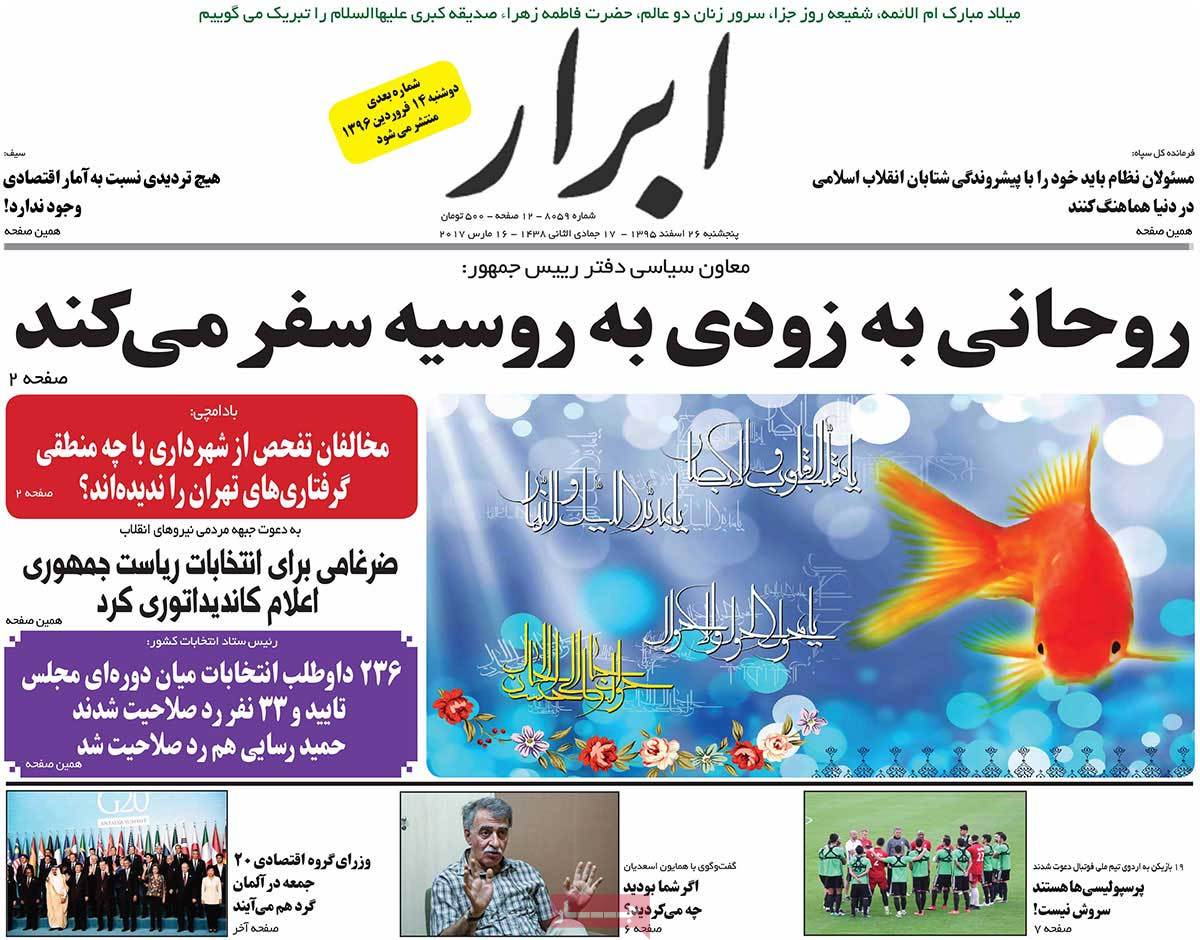 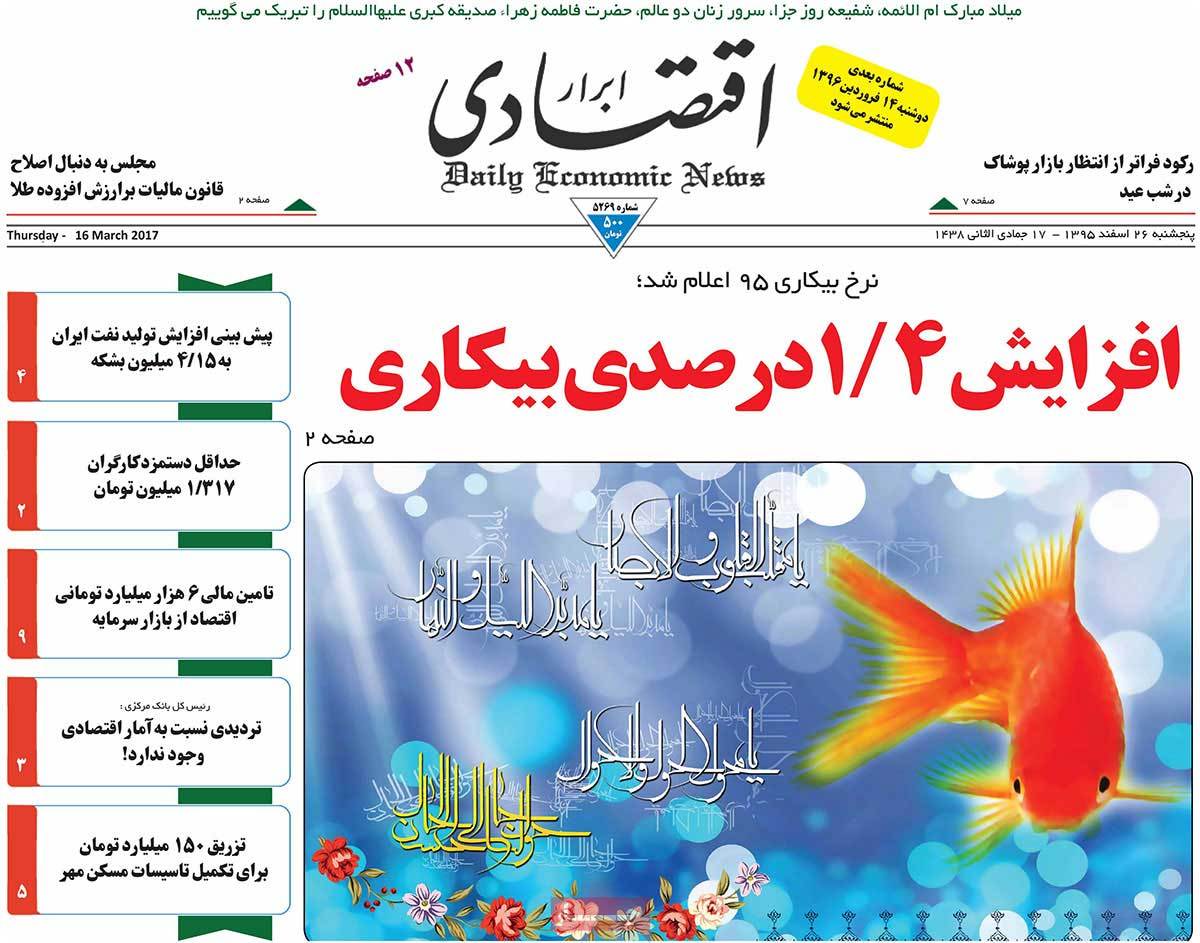 2- Old Traditions instead of Dangerous Firecrackers in Chaharshanbe Soori 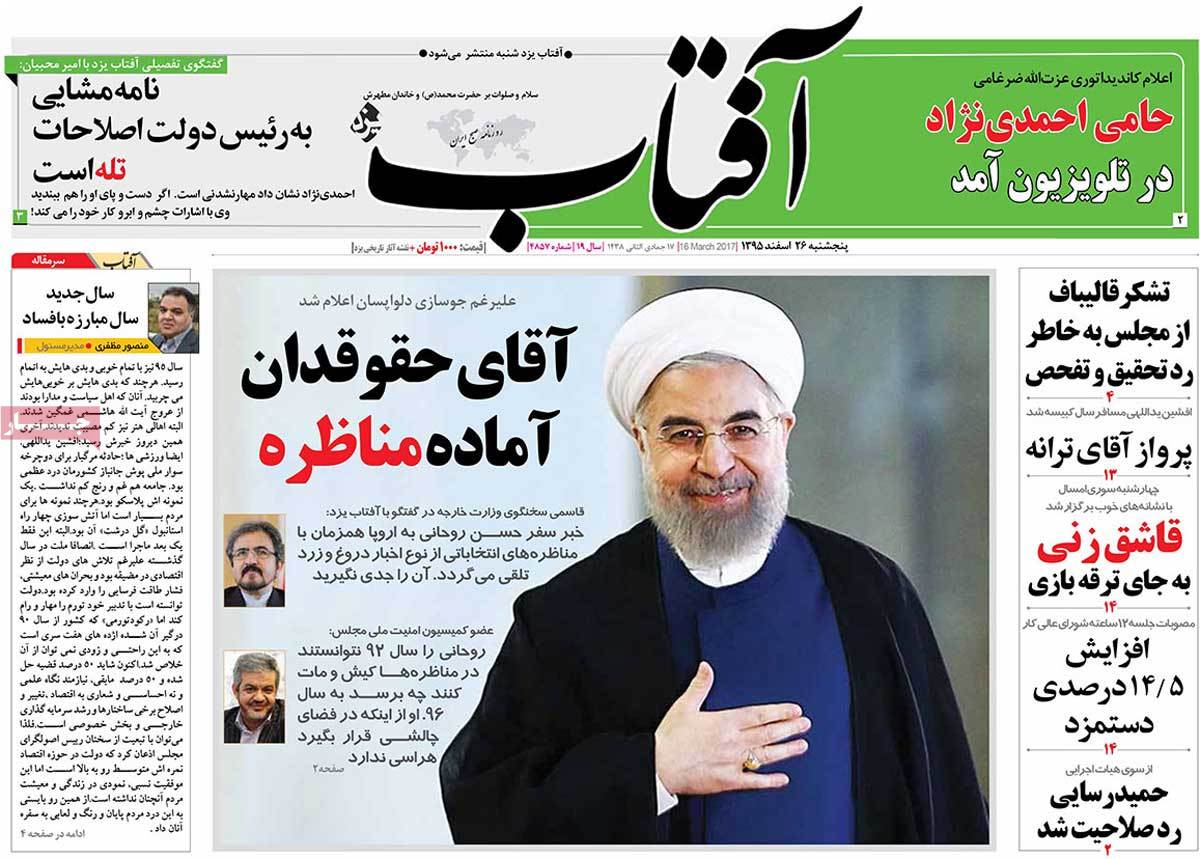 3- Russians Ready to Stab Iran in the Back: Analyst 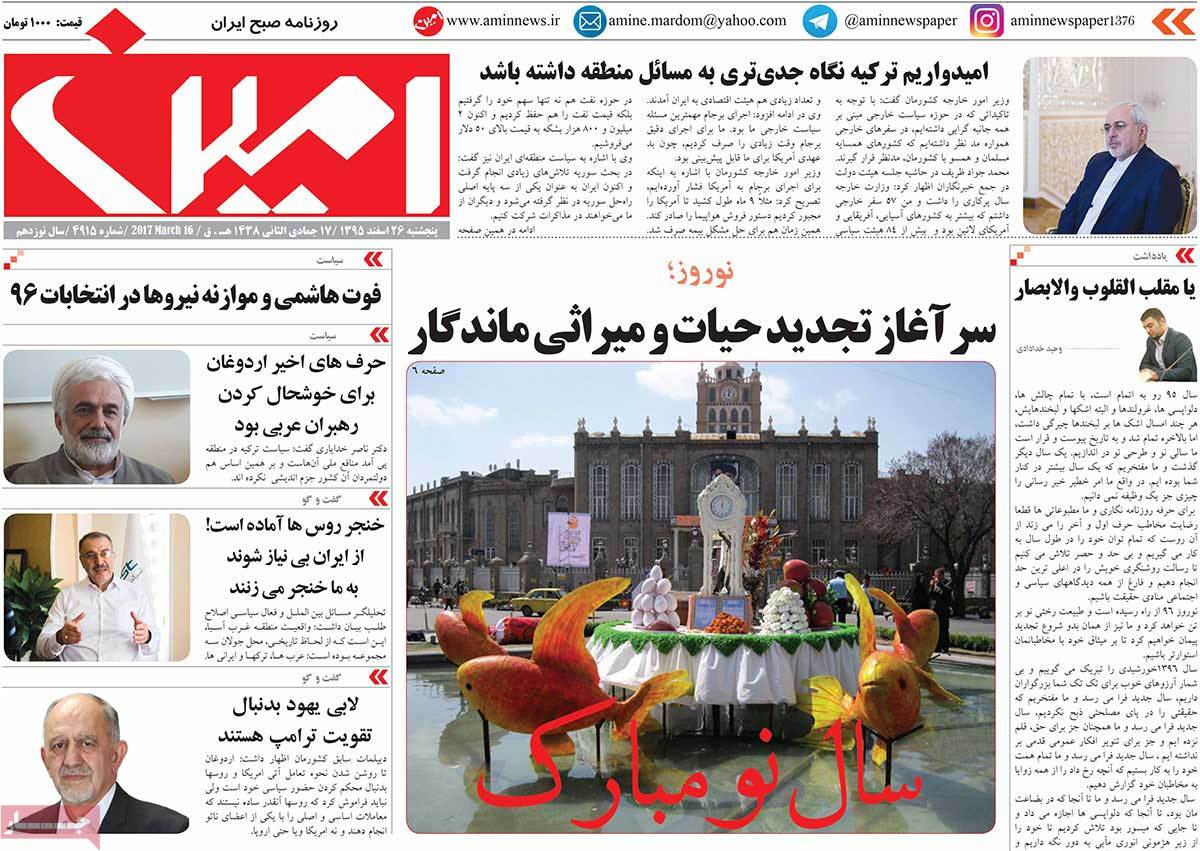 1- Conservatives Have Turned to Artillery against Rouhani’s Gov’t: Analyst

4- Editor-in-Chief of Kayhan Newspaper: Airbus is a Good, Modern Plane 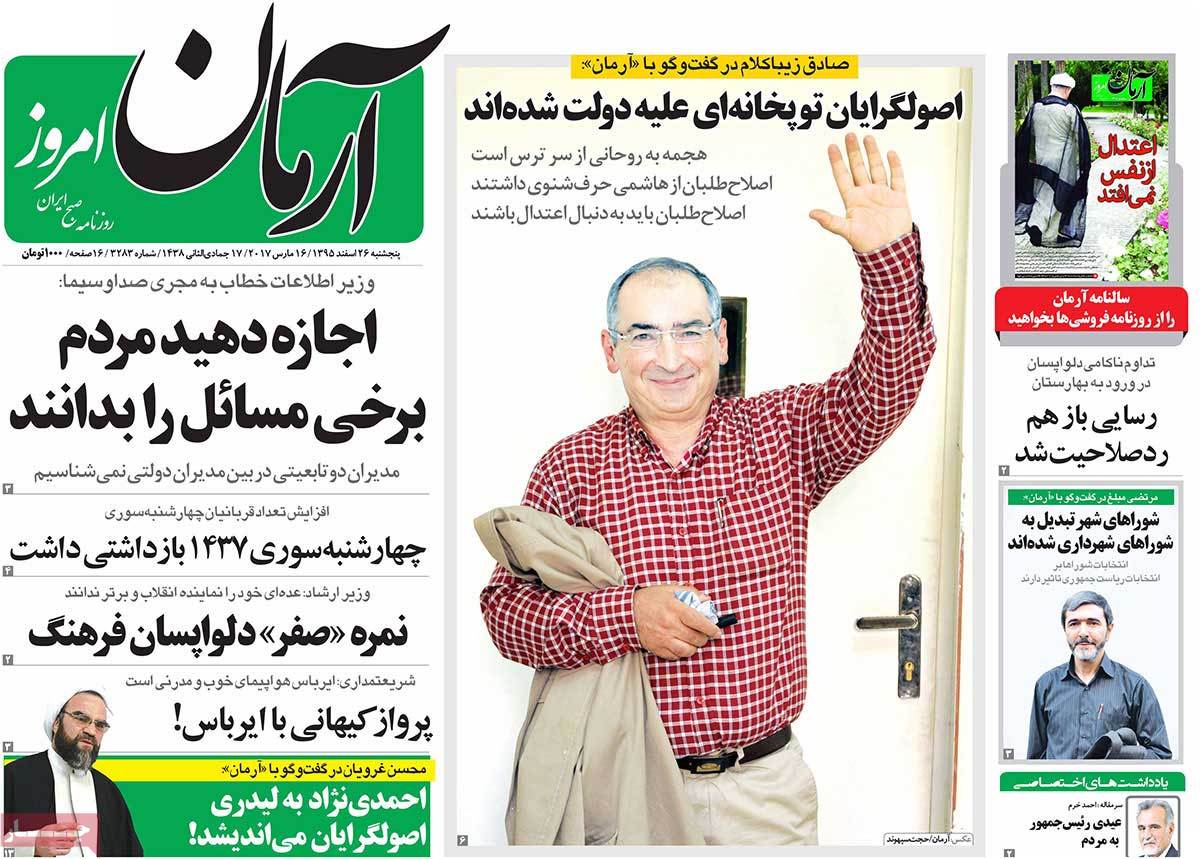 2- Reformists Planning to Win Majority of Seats in City Councils

4- Goodbye the Loving Poet: Is Yadollahi Last Victim of This Year? 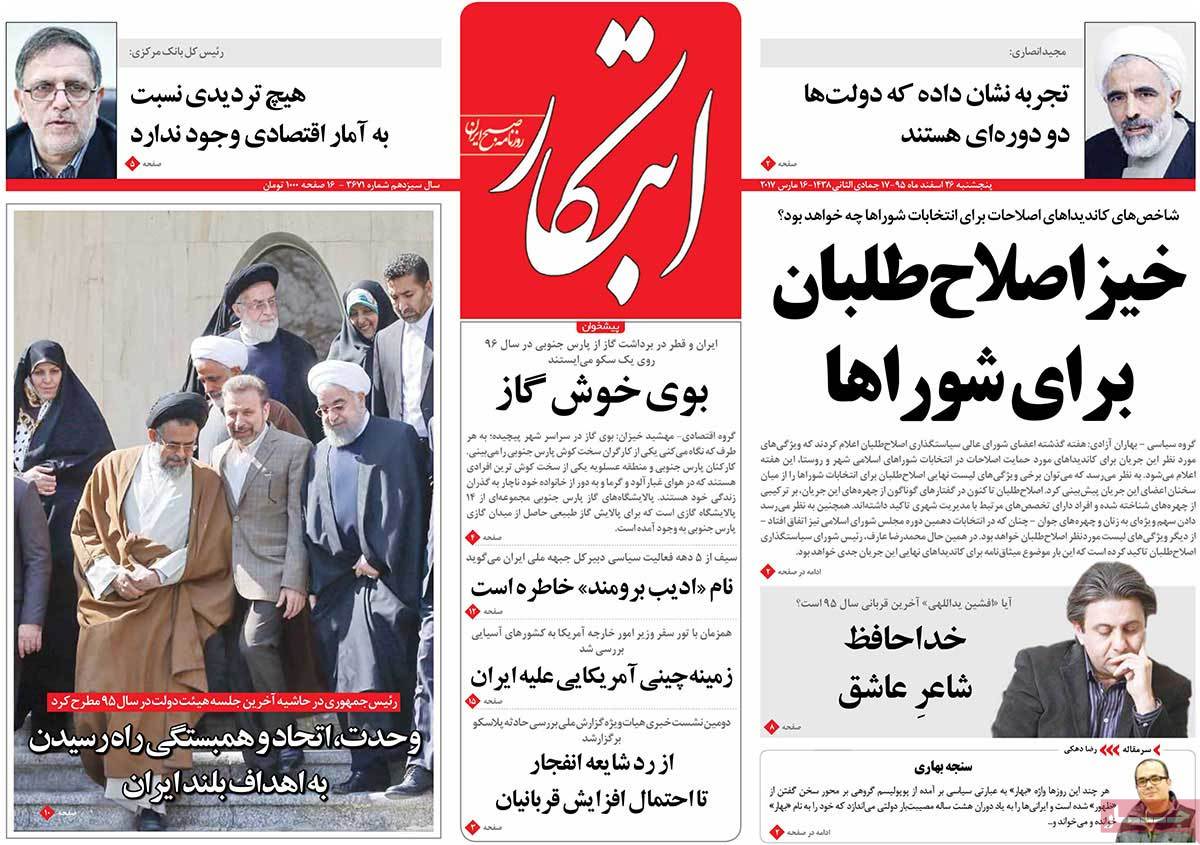 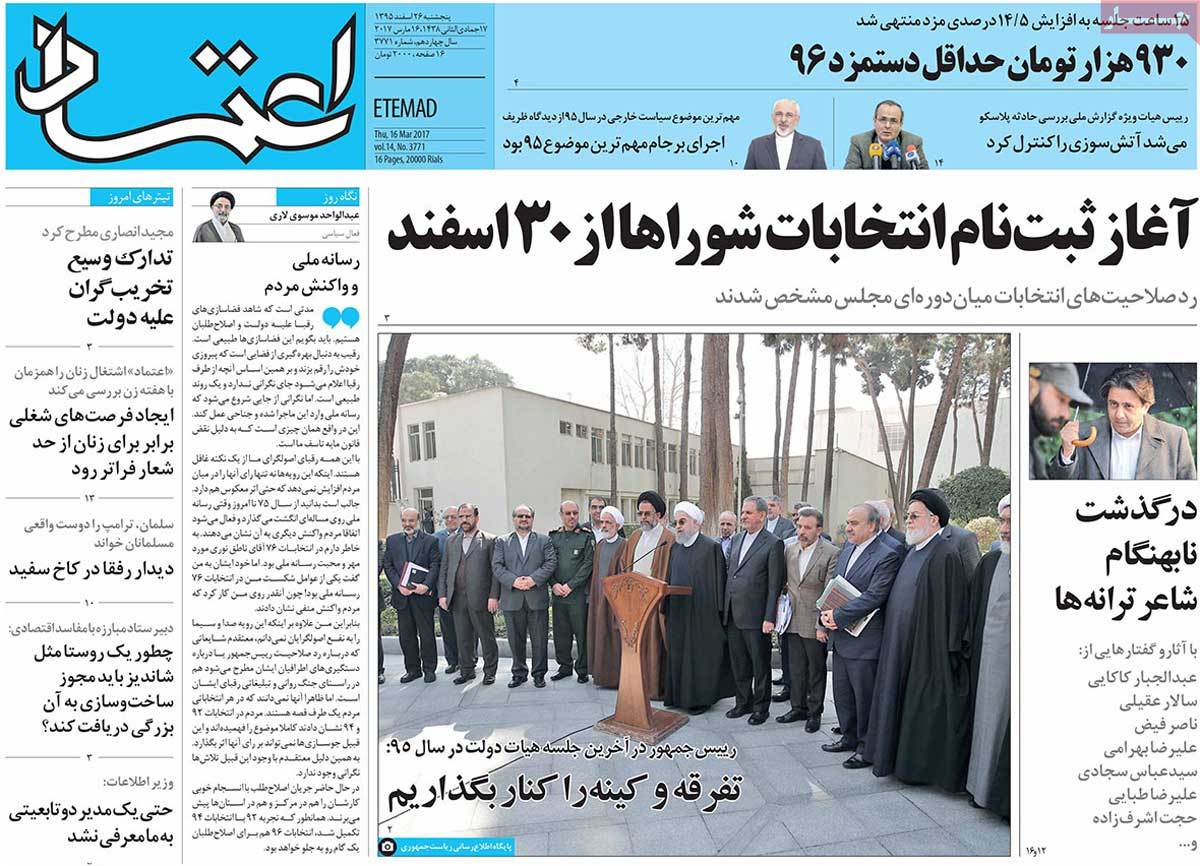 1- Rouhani: Let’s Think of National Interests instead of Partisan Ones

2- Iranian Immigrants Have Exceptional Share in US Growth: Democrat Congresswoman 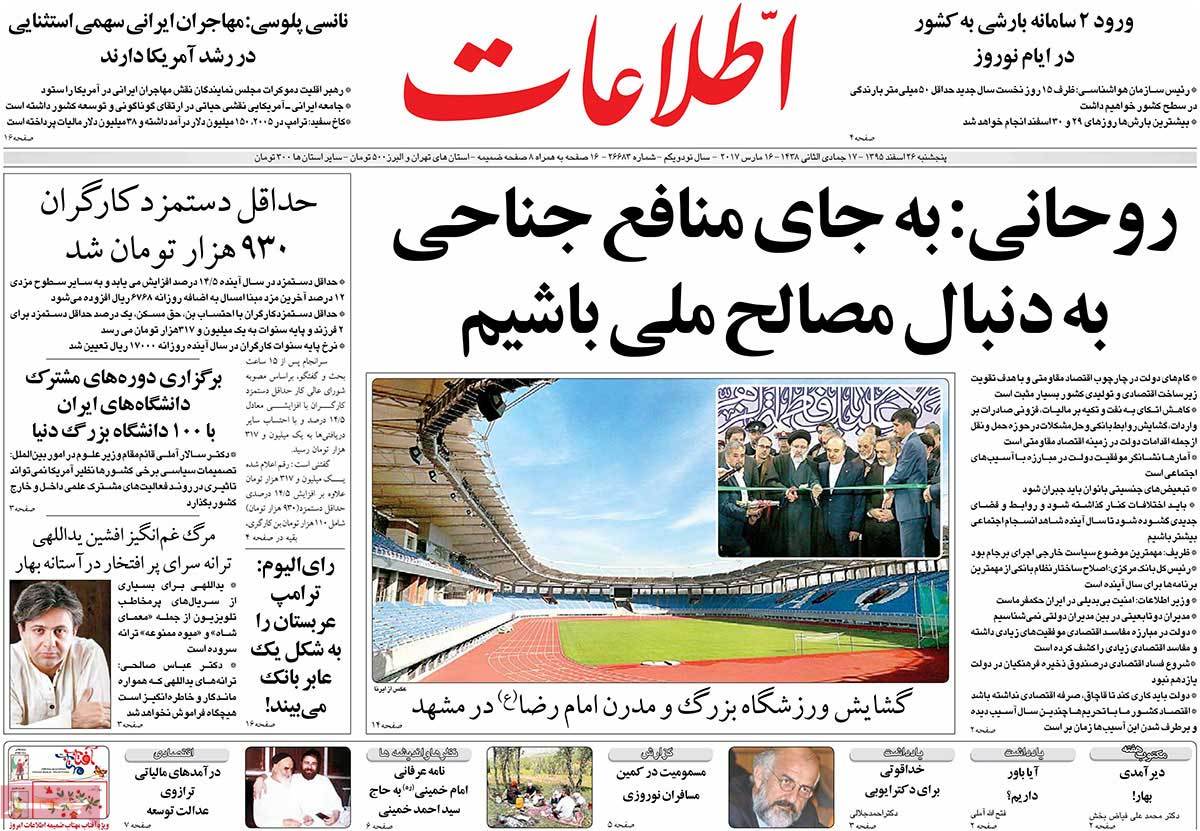 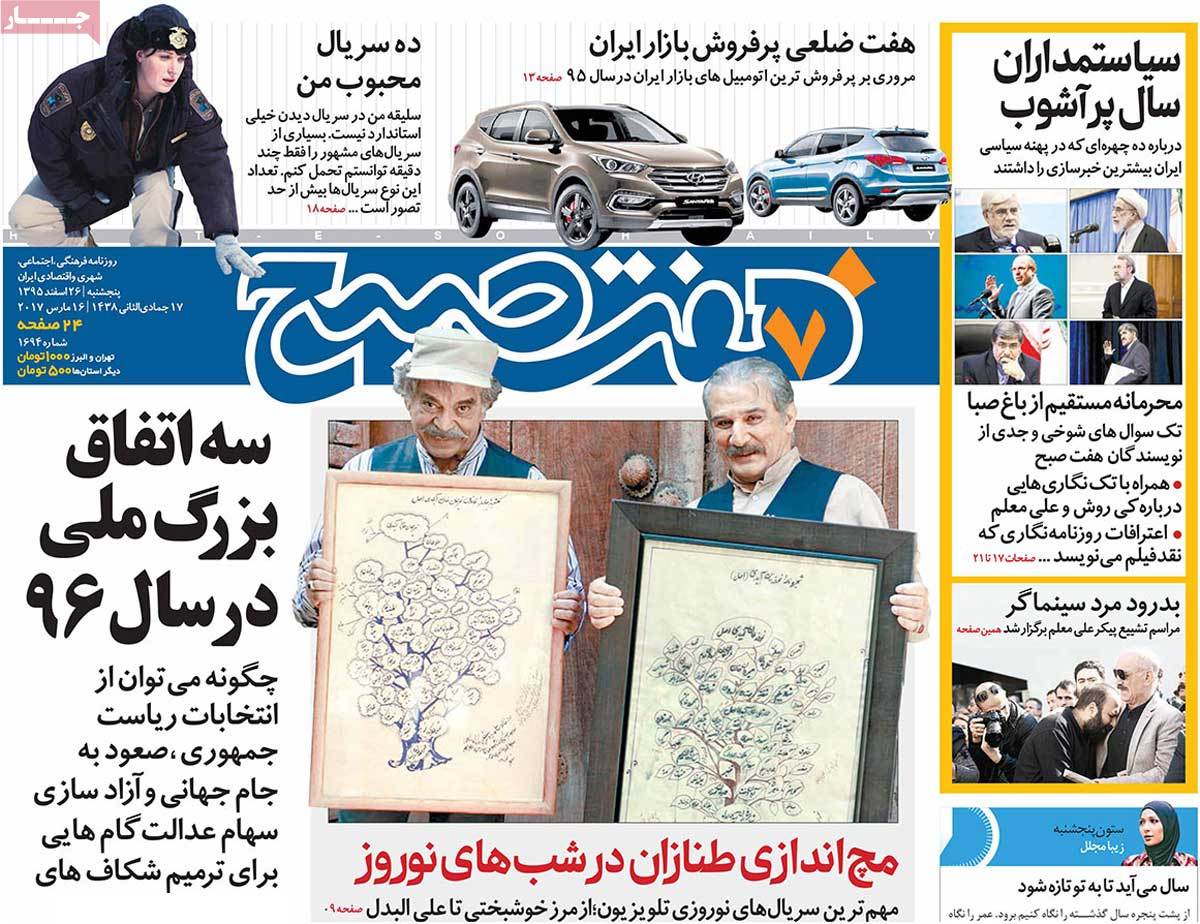 1- US Violation of Its Commitments Was Predictable: Zarif

3- IRGC Construction Base to Build Hospital with 1,400 Beds in Shiraz 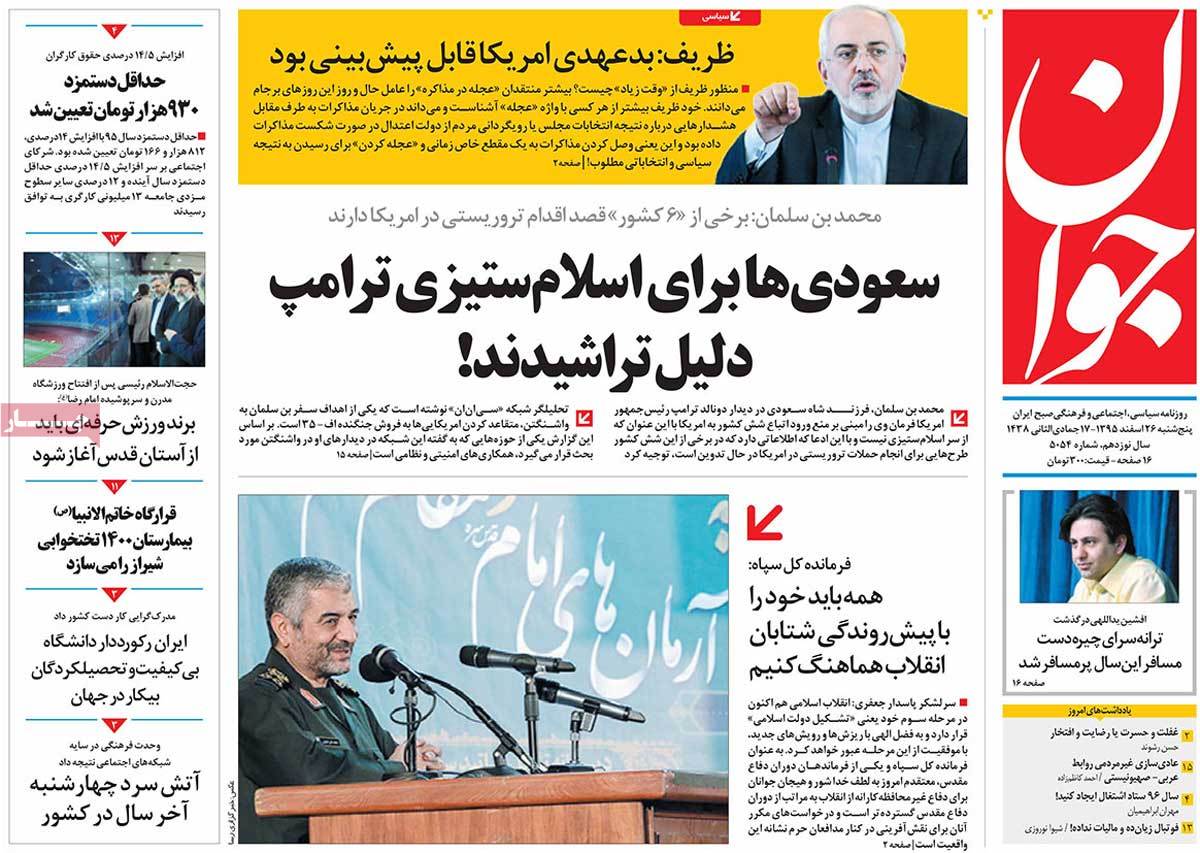 3- Nuclear Deal Was Most Important Foreign Policy Issue in Past Year: Zarif 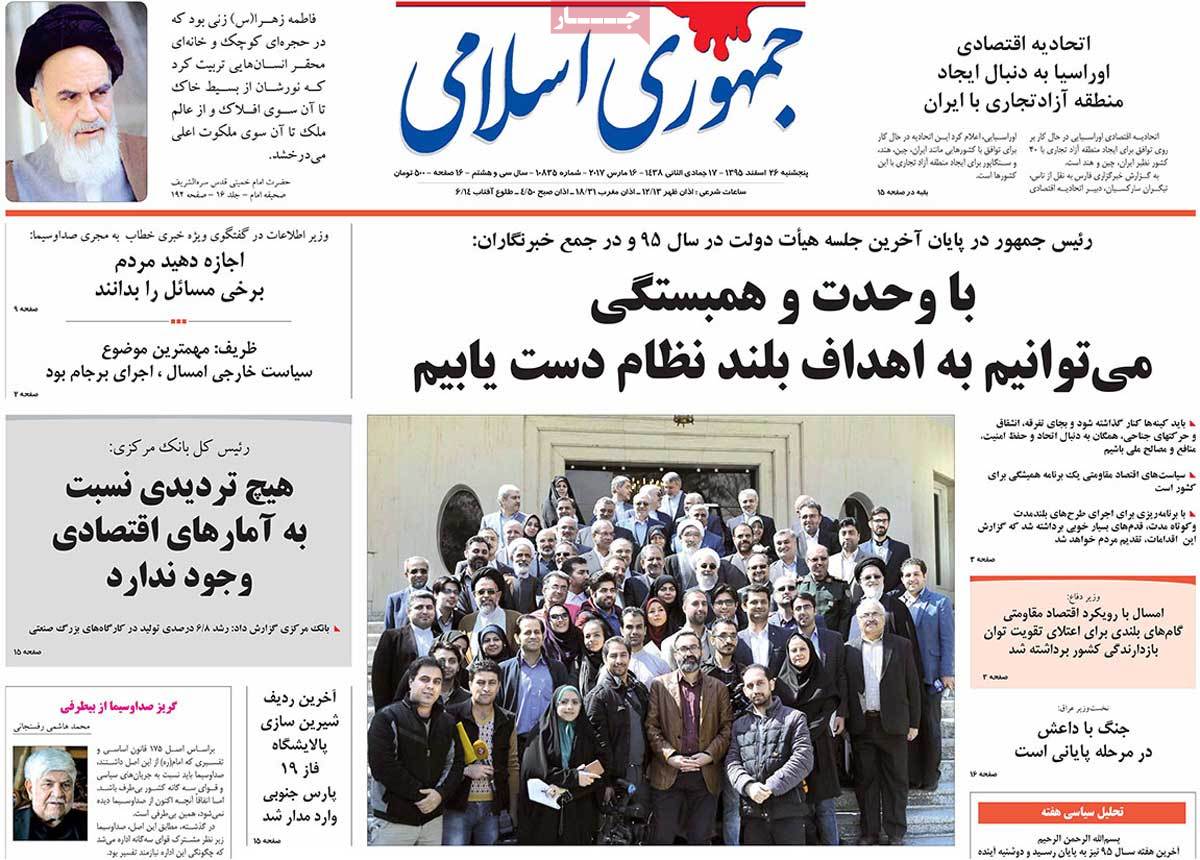 2- Iran on Frontline of Fight against Terrorism: Professor Lawrence Davidson

3- Don’t Trust Erdogan, He Even Betrays His Closest Friends: Gulen to Barzani 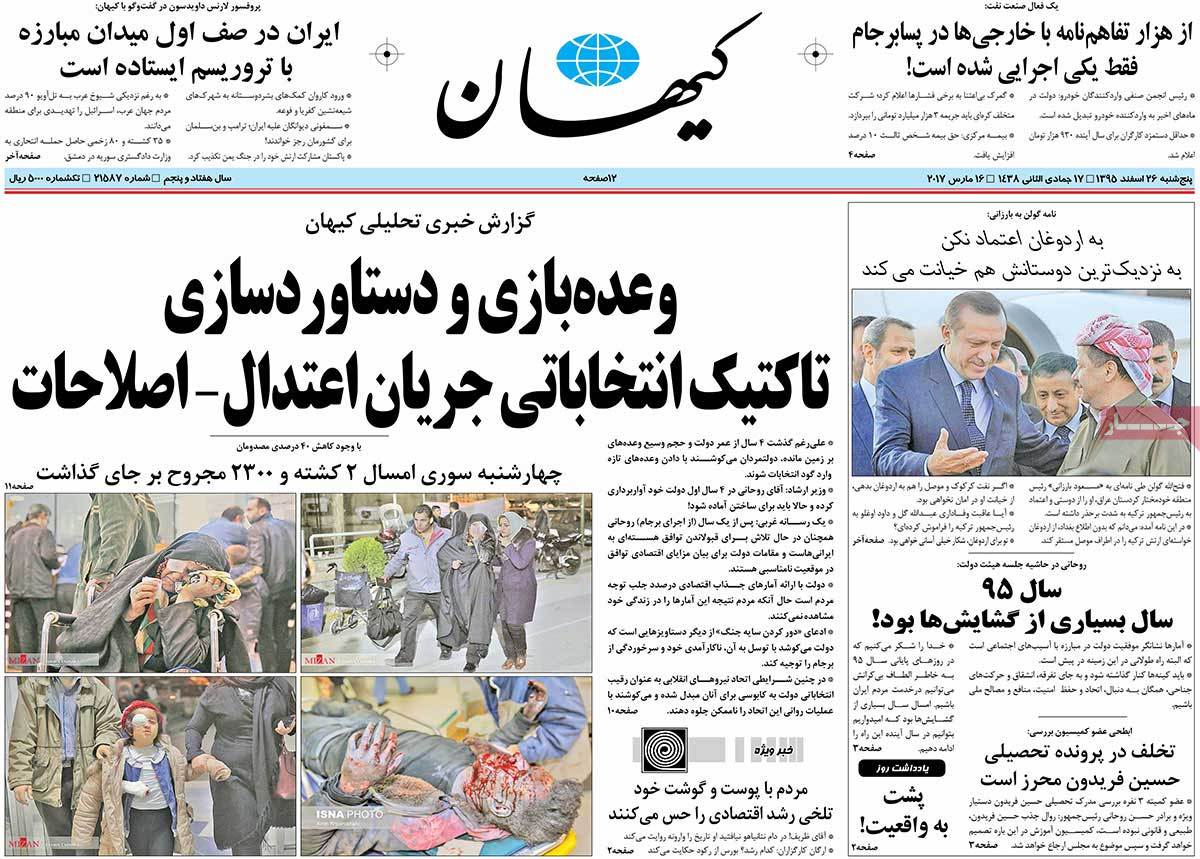 2- Where Do Terrorists Head to after Mosul? 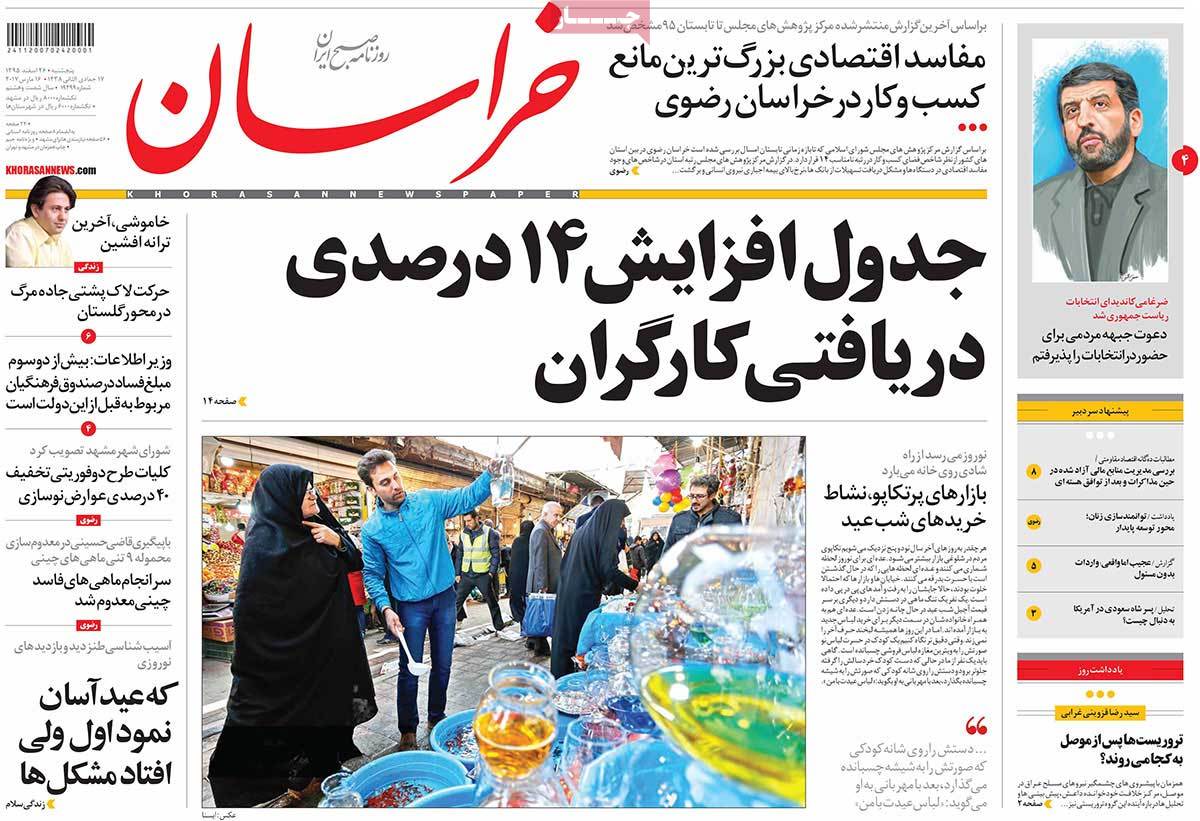 2- Increased Tensions between US, Europe

1- An Army Standing against Rouhani: On Conservatives Plan for May Election

3- Russia to Become Stronger If Iran Is Strong in Mideast: Analyst 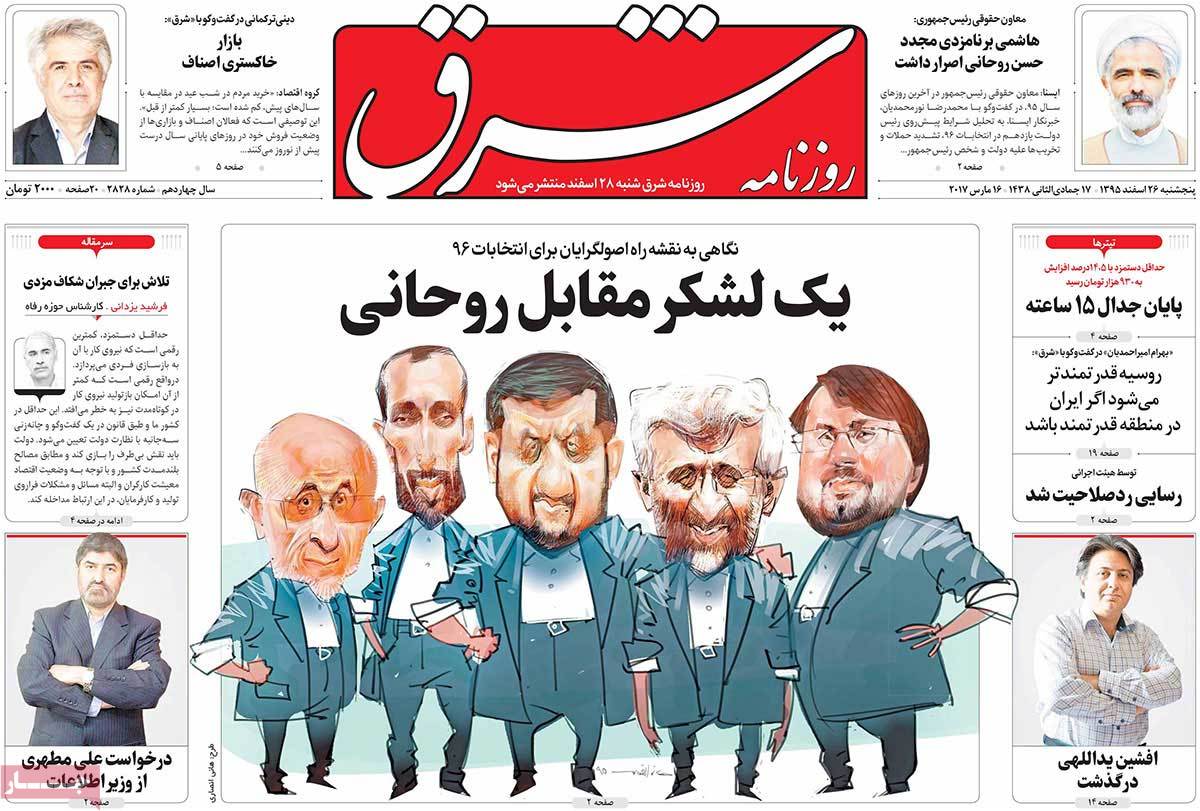