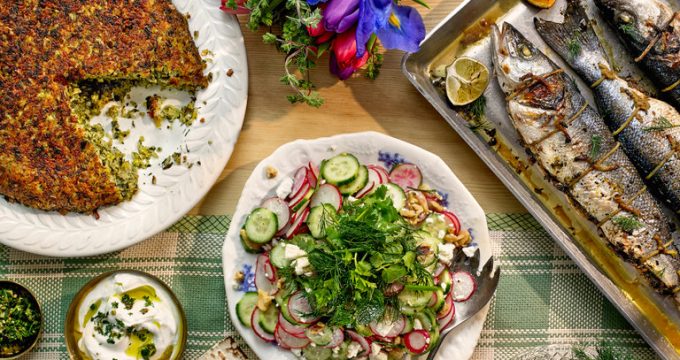 The verdant food of Iran entices at Persian New Year

The New York Times | SAMIN NOSRAT: Pardis Stitt still remembers the grocery shopping trips of her childhood in Birmingham, Ala.: loading into the family car, a silver Oldsmobile station wagon with a maroon interior and an eight-track player, and wandering the store aisles as her mother tracked down the ingredients for dishes like kuku sabzi, the Persian frittata densely packed with an array of green herbs.

“Back in the day, you couldn’t find dill and cilantro at the Piggly Wiggly,” said Ms. Stitt, 51. “There was one Asian market, or else we had to drive two hours to Atlanta.”

Most cooks would omit the cilantro from a recipe before making a four-hour trek in search of it. But for Ms. Stitt’s mother, who moved to the United States from Iran with her husband in 1963, preparing food without herbs would be unthinkable. Fresh herbs, both raw and cooked, lie at the foundation of Iranian cuisine. Leaving them out would be like making Italian food without tomatoes or Japanese food without seaweed. In other words, nearly impossible.

This is especially true during Nowruz, the Persian New Year, a 13-day celebration that begins on the first day of spring. The holiday, which is secular, begins as families come together to count down to the precise moment of the equinox, even if it falls before dawn. (This year it will arrive on Monday at 6:29 a.m. Eastern time.)

During Nowruz (pronounced NO-rooz), everyone gathers around a haft sin, a table spread with seven items, including sprouts, which symbolize rebirth, and apples, which represent health and beauty. Family members may play music, pour fragrant drops of rose water into one another’s palms, or eat a bite of sweet baklava to usher in the holiday with all of their senses. Then comes the feast — lunch or dinner, depending on what time the equinox falls — followed by 11 days of herb-laden meals and teatime sweets. On the final day, it’s traditional to retreat outdoors for a day of picnicking.

The dishes of the Nowruz table are verdant and flavorful, like the kuku sabzi that Ms. Stitt loves. (Though she runs four restaurants in Birmingham with her husband, the chef Frank Stitt, she still calls her mother to request it.) Yet Iranian cuisine remains stubbornly unfamiliar in the United States, even as Americans have become more interested in Middle Eastern ingredients and foods like hummus, tahini and pomegranate molasses. There is a dearth of Persian restaurants outside the Los Angeles, New York and Washington areas, where a significant percentage of the nation’s half-million Americans of Iranian descent live.

(“Iranian” refers to nationality and “Persian” to ethnicity, and many Iranian-Americans use the terms interchangeably. Ms. Stitt suggested that this was in response to the 1979 crisis at the American embassy in Tehran. “That’s when we all switched from saying we were Iranian to saying we were Persian,” she said. “If you said Persian, people didn’t really know what that was.”)

But even Persian restaurants rarely offer the most distinctive Iranian cooking, which is labor intensive and often involves chopping great quantities of herbs. Instead, they tend to focus on kebabs and rice. Until recently, the best chance most Americans had to experience the food of Iran was to score an invitation to the home of an Iranian friend.

There may not exist a better ambassador for cooking with herbs than Hanif Sadr. Nearly every dish the chef serves includes mint, dill, parsley, tarragon, cilantro and tareh, a type of chive. Mr. Sadr, 34, grew up spending Nowruz on his family’s farm in the Gilan province in northern Iran, where he’d harvest herbs and forage for wild fruits and nuts for the holiday dishes. When he moved from Tehran to California for graduate school in 2013, he found the similarities in climate and landscape disorienting.

“The first few days after moving to Berkeley, I couldn’t tell whether I was in California or northern Iran,” he said. “In the hills, I found and foraged the same wild hazelnuts, Persian hogweed, citrus and green plums we have in Iran.”

After a temporary cooking job led him away from his studies and into the kitchen, Mr. Sadr founded Komaaj, a roving Iranian pop-up restaurant and catering company, in 2015. At dinners and “Caspian tea parties” around the Bay Area, he serves dishes like khiar dalar, cucumbers spread with a shockingly green paste of wild mint, pennyroyal, cilantro and salt. Or baghali ghatogh, a dill and fava bean stew scented with garlic and saffron, in which eggs are poached.

“It’s crazy!” Mr. Sadr said as he stared down a pile of cilantro, dill, parsley and tarragon on his cutting board, waiting to be chopped for use in bij, the mixture of chopped herbs, walnuts and pomegranate molasses that forms the base of many northern Iranian dishes.

Besides the sheer quantity of the herbs — in Iran, they are measured by the kilogram rather than the bunch — the thing that distinguishes Persian cuisine is the multifaceted role those herbs play. Whether they are wilted, stewed or fried, fresh herbs transform as they cook, first mellowing and then sweetening in flavor.

Americans generally encounter herbs in the form of a condiment, puréed into a sauce like pesto or sprinkled raw over a finished dish, and may not think of them as cornerstone ingredients. Mr. Sadr often meets diners who are incredulous that mint and cilantro can be cooked, with delicious results. “By the time you have finished dinner, you have eaten two whole bunches,” he tells them. “Herbs are not just a garnish for us.”

This year, Komaaj will host Persian New Year events in Berkeley and San Francisco. It’s traditional to eat fish, a symbol of life, so Mr. Sadr folds a little fish roe into bij, then stuffs the mixture into trout that he has drizzled with sour orange molasses. After a short turn in a hot oven, the fish emerges with crisp, brown skin. The sweet and sour herbs contrast with the delicate, flaky fish without overwhelming it.

“This is a rich, ancient way of cooking, and people here are so excited about our ingredients, our herbs,” he said. “I really want to win people’s hearts with the food I’m cooking.”

For Mana Heshmati, an engineer in Detroit who runs a pop-up restaurant called Peace Meal Kitchen, the taste of Nowruz is sabzi polo, an herbed rice dish that represents prosperity and rebirth. “The color of the food, and the symbolic meaning behind it, is as exciting as it tastes,” she said.

Ms. Heshmati, 27, and her family moved around the Midwest after coming to the United States in 1993, but the dish was a constant at the holiday table every year. The rice for sabzi polo is cooked in two stages. The rice is parboiled and then tossed with an abundance of herbs and leeks and layered into a preheated pan coated with butter and oil. As the mixture is spooned into the pan, the bottommost layer of rice sizzles, turning into the golden-brown crust known as tahdig, while the rest of the rice gently steams until the grains are fluffy.

Ms. Heshmati said her mother added an extra flourish: “She always puts a handful of whole garlic cloves in the rice, because we used to fight over who got those.”

Instead of salad, nearly all Persian meals are accompanied by sabzi khordan, a heaping platter of fresh herbs, radishes, walnuts and feta cheese served with flatbread. Guests delight in making perfectly balanced mouthfuls of pungent herbs, spicy radishes, salty cheese and crunchy nuts wrapped in pieces of warm bread. Sometimes, Mr. Sadr turns sabzi khordan into a salad for diners who are not accustomed to eating handfuls of undressed raw herbs.

Ms. Heshmati started Peace Meal Kitchen about a year ago to share her Iranian cooking, like ghormeh sabzi, a fragrant herb, bean and beef stew scented with dried limes. “I love ghormeh sabzi,” she said. “But I took it once for lunch in elementary school and then never again because I got made fun of. I even had a boyfriend in college who made fun of it.”

She now regularly prepares ghormeh sabzi for her guests, some of whom drive from Canada or from suburbs over an hour away. At a recent event, she sold out of 80 servings in 90 minutes.

“Iranian food is delicious,” she said. “It’s hard to hate on it.”