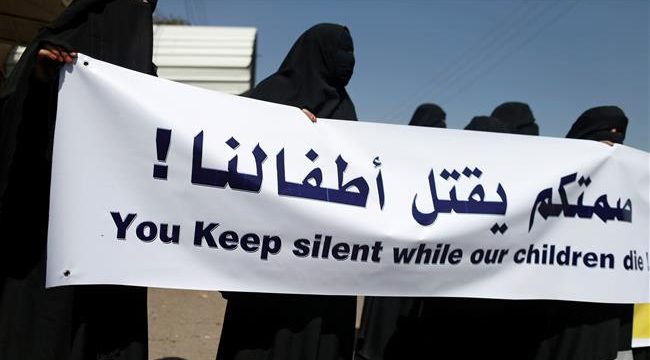 Press TV- Dozens of Yemeni women have staged a sit-in in front of the UN office in the capital city of Sana’a, calling for an end to the Saudi aggression against their country.

The three-day sit-in started on Tuesday with protesters setting up tents in front of the UN office on Tuesday.

Protesters carried signs calling for the removal of an air and naval blockade on Yemen imposed by Saudi Arabia.

They also urged the UN to pressure Riyadh and its allies to allow delivery of food and medical aid into Yemen, which the UN aid chief, Stephen O’Brien, has described as the “largest humanitarian crisis in the world.”

Saudi Arabia has been pounding Yemen since March 2015. Over 12,000 people have died and over 40,000 wounded since the onset of the aggression, which was launched in an alleged attempt to bring Yemen’s former Riyadh-allied government back to power.

Over the past two months alone, more than 48,000 people have been displaced as a result of the Saudi war on the poorest Arab nation, which is also grappling with extreme famine.

At present, two thirds of Yemen’s population, or 18.8 million people, are in acute need of assistance and nearly 7.3 million Yemenis are designated by the UN as “severely food insecure.”

Saudi jets also used cluster bombs in their airstrikes on the Nihm district of Sana’a Province, despite the global outcry against the use of the internationally-banned weapons by Saudi Arabia.

Saudi Arabia also targeted an area in the southwestern province of Lahij.

In retaliation, Yemeni forces repelled Saudi attacks near the border with Saudi Arabia’s southern province of Najran, inflicting heavy losses on the Saudi forces, who were backed by Apache helicopters and reconnaissance drones.

“We know today that a solution is close because we know it. We know that a solution in Yemen will be based on a military and political aspect so it is a bit of a shame that the parties do not want to sit down at the table to discuss that,” he told reporters after talks with French Foreign Minister Jean-Marc Ayrault in Paris.

“One of the subjects that concerns us is the fact that we are seeing an increase in military operations with consequences for the civilian population,” Ahmed said.

The French foreign minister, for his part, underlined the need to highlight the situation in Yemen, saying, “This is a conflict that is less talked about than others, but it can’t be forgotten because the humanitarian consequences on the ground are catastrophic.”