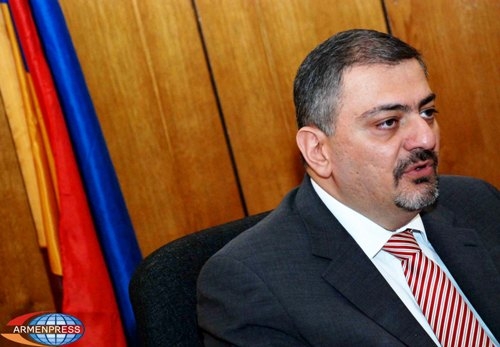 Armenian Vice Prime Minister, Vache Gabrielyan said Armenia can lead the way in the talks between Iran and EAEU.

NEWS.am website wrote on Tuesday talks between EAEU and Iran continue and Yerevan has an important role in the negotiations because Armenia is the only EAEU member having common border and experience of cooperation with Iran.

Gabrielyan added Armenia is well-aware of market features and trade mechanisms in Iran; thus, it can lead the way. On the other hand, close cooperation with Iran is a priority for Armenia.

Prime ministers of Russia, Armenia, Belarus, Kazakhstan, and Kyrgyzstan in the meeting on March 6 in Bishkek had agreed to formulate a deal to create a free-trade zone with Iran.

The agreement holds ample economic opportunities, such as trade and investment; and it also prepares more fields of cooperation.

EAEU, co-founded in Jan 2015 by Armenia, Russia, Belarus, Kazakhstan, and Kyrgyzstan, encompasses a population of 180 million. It has a $2.2 billion GDP, and $ 3.1 trillion industrial production.

Vietnam signed an agreement to cooperate with this union; and certain countries including China, Turkey, Tunisia, India, New Zealand and Mongolia call for such a union.

Iran and EAEU have held some rounds of talks concerning economic partnership which led to temporary cooperation in form of trade facilitation and zero tariff rates for some Iranian goods.