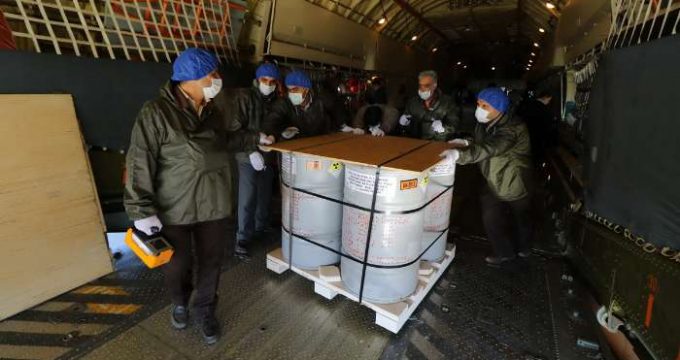 Iran raps UK for lack of commitment to yellowcake deal

IFP- Iranian parliamentarian Mohammad-Javad Jamali Nobandegani lashed out at the UK’s lack of commitment to its contract with Iran to sell 900 tonnes of concentrated uranium, also known as yellowcake, to the country, saying the issue will soon be addressed in a meeting of the Iranian Parliament’s National Security and Foreign Policy Commission.

According to a Farsi report by ICANA, Jamali Nobandegani noted that Germany, France, the US and the UK each played the role of a bad cop over the course of the nuclear negotiations with Iran, adding the same role was performed by the UK with regard to its contract with Iran when London broke its promises to Tehran.

With the coming into power of Theresa May and Donald Trump as the UK and US prime minister and president, respectively, there has been a change in the division of responsibilities between the world powers, with the British radical conservative being assigned to go back on the UK’s promises to Iran, he said.

The Iranian lawmaker stressed that, “We expect the Iranian officials in charge of supervising the other sides’ commitment to the implementation of the nuclear deal, also known as the Joint Comprehensive Plan of Action (JCPOA), to give stronger responses to such breaches of commitments by the six world powers.”

“In the past, we were witness to several instances of Washington’s failing to honour its financial and banking commitments to Tehran. This time, the UK is creating problems for the implementation of the deal.”

Commenting on the performance of the Iranian Ministry of Foreign Affairs in following up the breaches of promises by the sextet with regard to the JCPOA, he said, “The Foreign Ministry has done its utmost to address such issues. Nevertheless, since this one has recently been raised by the head of the Atomic Energy Organization of Iran (AEOI), Ali Akbar Salehi, we are not adequately informed about the moves made by the ministry in this regard.”

The lawmaker noted that after Rouhani took office [in 2013], the responsibility of following up issues pertaining to the nuclear talks were taken away from Iran’s Supreme National Security Council and handed over to the Foreign Ministry.

Therefore, he added, the ministry is expected to react immediately and precisely to such moves by the P5+1 and act transparently in protecting the rights of the Iranian nation.

Jamali Nobandegani said although the Foreign Ministry has done its best to tackle such issues and safeguard the rights and interests of the Iranian people, it has, so far, failed to achieve any outstanding achievements.

“The Iranian Parliament’s National Security and Foreign Policy Commission has failed to hold any serious sessions recently, as it has been engaged in the process of reviewing the bills for the budget of the year to mid-March 2018 and the Sixth Five-Year Economic Development Plan (2017-22). However, it will soon hold a meeting to address this issue.”