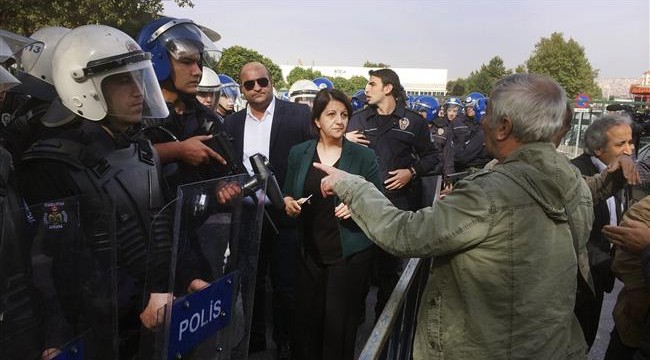 Press TV- Turkey has sealed off the Dutch embassy in Ankara and consulate in Istanbul after the Netherlands stopped Turkish Foreign Minister Mevlut Cavusoglu from entering the country.

“Entry to and exit from the Dutch embassy in Ankara and the consulate in Istanbul have been closed for security reasons,” said Turkish foreign ministry sources on Saturday.

“The residences of the embassy’s charge d’affaires and the chief consul were also subjected to the same treatment,” they added.

Meanwhile, protesters have gathered outside the Dutch consulate, singing the Turkish national anthem and chanting anti-Netherlands slogans such as “Netherlands, don’t be surprised and don’t test our patience,” ”God is great,” ”Barbarian Europe” and “Dictator Netherlands will pay.”

The announcement was made after Cavusoglu’s plane was not permitted to land in the Netherlands where he was set to take part in a rally aimed at gathering support for a constitutional referendum in Turkey. On April 16, Turkey will hold a referendum aimed at abolishing the office of the prime minister and giving more executive powers to the currently largely ceremonial position of the president.

Dutch media later reported that the minister had been detained by the police, branded an “undesirable alien,” and would be escorted out of the country.

Protests also erupted outside the Turkish consulate in Rotterdam, where over a thousand people had gathered by early on Sunday morning.

Riot police were later called in to disperse the crowds with water cannons and horses.

Meanwhile, the Turkish Foreign Ministry said also announced that it does not want the Dutch ambassador to Turkey to return “for some time.”

“We do not want the Dutch ambassador, currently on leave, to return to his post for some time. It has been explained to our counterparts that this grave decision taken against Turkey and the Dutch Turkish community will cause serious problems diplomatically, politically, economically and in other areas,” it added.

The call was made after the Turkish Foreign Ministry summoned the Netherlands’ charge d’affaires.

Turkish President Recep Tayyip Erdogan also lashed out at the Dutch government for at the decision, saying the ban was reminiscent of Nazism.

“They do not know politics or international diplomacy,” Erdogan said “These Nazi remnants, they are fascists,” he added.

Germany has also canceled several of the Turkish ministers’ plans for rallies.