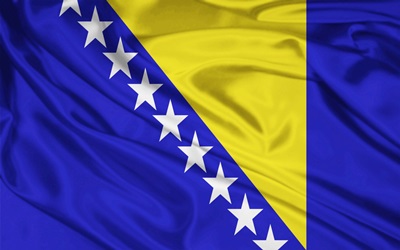 MNA– Chairman of the Committee for Foreign Policy and National Security of Iran Alaeddin Boroujerdi has highlighted the development of bilateral relations in separate meetings with the authorities of Bosnia and Herzegovina.

Iranian parliamentary delegation met with Bosnia’s high-ranking parliamentary, political and security officials and discussed the development of bilateral relations, on a visit to the country on Friday.

Boroujerdi and his entourage were welcomed upon their arrival in Sarajevo, by the head of Bosnian Parliament’s Committee on Foreign Trade and Customs Semsudin Mehmedovic and Iran’s Ambassador to Bosnia Seyyed Hossein Rajabi.

According to his schedule, Boroujerdi first met with Chairman of the Joint Committee on Defence and Security of Bosnia and Herzegovina Sifet Podžić and underlined the need for strengthening parliamentary relations in all fields.

Podžić pointed to the friendly ties between Iran and Bosnia stressing the need for further collaboration in various fields such as parliamentary affairs.

They also exchanged views on performance of the commissions and encountering defense and security issues.

Welcoming the removal of oppressive sanctions against Iran, he described Iran’s nuclear deal, officially known as Joint Comprehensive Plan of Action (JCPOA), as a means for creating stability and boosting ties between Iran and other countries.

Boroujerdi referred to the long-standing ties between the two countries, saying bilateral relations in the fields of political, economic, cultural and commercial cooperation has started between the two capitals since 25 years ago.

Boroujerdi also met with the Chairperson of the House of Peoples of the Parliamentary Assembly of Bosnia and Herzegovina Bariša Čolak.

Čolak said the political commutes of Officials from both countries would pave the way for the expansion of cooperation between the two countries and called for further development of parliamentary relations between Iran and Bosnia.

Meanwhile, Boroujerdi said that Iran was by the side of the Bosnian nation and government in their most difficult times of the war in 90s and never withheld any contribution to help establish peace and stability in that country.

The Iranian parliamentary delegation has embarked on a trip to Balkan as of Tuesday which took them to Belgrade and Sarajevo, so far.