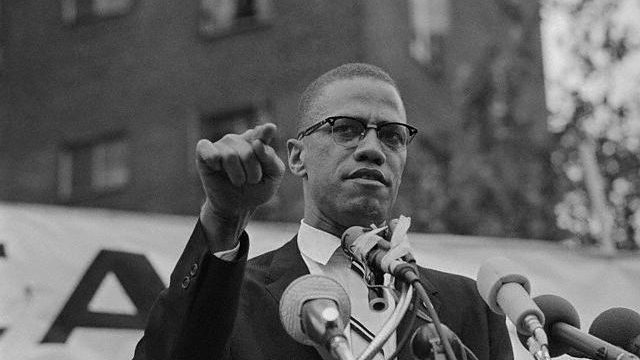 American Herald Tribune|Yuram Abdullah Weiler: “The racist white man’s opposition automatically made me know that I did offer the black man something worthwhile.” —El-Hajj Malik El-Shabazz (a.k.a. Malcolm X)[1]

On February 21, 1965 Malcolm X stepped up to the podium at the Audubon Ballroom located at West 165th Street in the Washington Heights neighborhood of upper Manhattan in New York City.  It was shortly after 3 p.m. and some 400 of the followers of the fiery Muslim Black leader and orator had gathered in the venue.  Only a week before, Brother Malcolm’s home in East Elmhurst, New York in the Borough of Queens had been firebombed with Molotov cocktails.[2]

Brother Malcolm began to address the crowd gathered there when suddenly, three men rushed towards him and opened fire using a .38 and a .45 caliber automatic pistol, and a sawed-off shotgun.  After a rapid burst of gunfire, which may have come from more than just the three men, Brother Malcolm was hit and fell backwards, knocking over some chairs behind the podium, onto the stage.  His wife, Sister Betty Shabazz, who had thrown her body over the couple’s children when the shots rang out, got up and rushed to her husband crying, “They’re killing my husband!”[3]

Brother Malcolm was rushed to the Vanderbilt Clinic of Columbia-Presbyterian Medical Center, only 200 yards from the assassination scene, but attempts at reviving him were futile.  He was pronounced dead at 3:30 p.m.  A spokesman for the hospital stated that he was “medically dead” at the time that he arrived at the third floor emergency room.  Brother Malcolm’s killers, Thomas Hagan, Willie Harris and William Parker, were apprehended by New York Police.[4]

What took place in Brother Malcolm’s life that led to his martyrdom on that tragic day in 1965 has been the subject of numerous books, movies and some, but not nearly enough, academic .research.  As a result, an undistorted picture of his life and his numerous contributions has yet to emerge.  Additionally, the Nation of Islam, for which Brother Malcolm served as a minister under Elijah Muhammad for 17 years, had been infiltrated by the FBI, and Alex Haley, with whom he wrote an autobiography, has been accused of being an FBI collaborator.[5]

Brother Malcolm was born in Omaha, Nebraska on May 19, 1925 to Louise Norton and Earl Little, the fourth child in a family that eventually grew to have eight children.  His father, Earl Little, was a Baptist minister, a civil rights activist and a fervent supporter of the Black Nationalist leader, Marcus Garvey.  As a result of his father’s activism, Brother Malcolm had to move with his family several times, and eventually ended up in Lansing, Michigan, where his family’s home was burned down and his father was brutally murdered.  He was first beaten and then run over by a trolley car, cutting him almost in half—most likely by white supremacists of the Black Legion.[6]

Louise attempted to keep the family together after the murder of her husband, and for a while she succeeded by sheer determination and monetary help from one of Earl’s two life insurance policies.  However, the second insurance company falsely claimed that Earl had committed suicide and refused payment, forcing Louise, who of course protested, to take jobs as a seamstress or a maid for wealthy white families.  For a time Louise managed to keep the family together, but eventually, she was unable to cope with the burden of eight children and was compelled to disperse the family among relatives, and young Brother Malcolm was sent to live with a relative in Boston.[7]

As he became older, he became involved with hustling and other criminal activity, and was ultimately arrested and sent to prison.  It was there in prison that he used his time to educate himself and also study the teachings of Elijah Muhammad, leader of the Nation of Islam (NOI).  Given the circumstances of his life, it was relatively easy for him to absorb Elijah Muhammad’s teachings that “the white man is the devil” and “the Black man is brainwashed.”  After all, his family had been terrorized and his father killed by white supremacists, while he himself had been harassed by white police and prison guards, exploited by white employers and incarcerated by white judges.[8]

After his parole in 1952, Brother Malcolm became a leading minister and national spokesman for NOI, and organized new mosques in Detroit and Harlem.  His charisma attracted many new members to NOI and also national attention on a week-long television special produced by Mike Wallace in 1959.  His activities also had attracted the attention of the FBI, which had opened a surveillance file on him in 1953.[9]

Unfortunately, Brother Malcolm’s admiration of Elijah Muhammad was dashed when he discovered that his mentor, whom he regarded with almost prophet-like reverence, had been involved in numerous extra-marital affairs, which had produced several illegitimate children.  As a result of this mentally crushing discovery, Brother Malcolm began to view the NOI as being built on a foundation of lies, and started his own organization, the Muslim Mosque, Inc., in 1964.[10]

In the same year, Brother Malcolm decided to do the Hajj, which was perhaps the most transformational experience of his life.  He flew from New York to Frankfurt, Germany under his Islamic name of Malik El-Shabazz on April 13, 1964.  Arriving in Mecca on the 20th, Brother Malcolm wrote about experiencing a sense of brotherhood among peoples of all colors that he had never had previously.  The shift in his thinking can be deduced by comparing his statements before and after his Hajj experience.

For example, on November 10, 1963, Brother Malcolm addressed the Northern Grass Roots Leadership Conference in Detroit, Michigan, illustrating his continued distrust of whites.  “I know some of you think some of them [whites] aren’t enemies,” he said, “Time will tell.”[11]

In comparison on May 29, 1964, he spoke before the Militant Labor Forum in New York City stressing the need for collaboration with whites while emphasizing the need for unity among Blacks.  “In my recent travels into the African countries and others, it was impressed upon me the importance of having a working unity among all peoples, black as well as white,” he said.  “But the only way this is going to be brought about is that the black ones have to be in unity first.”[12]

Brother Malcolm maintained this latter position until his life was cut short by a barrage of assassins’ bullets.  On January 7, 1965—less than two months before his murder—Malcolm reiterated his position at the Militant Labor Forum.  His words seem to be almost clairvoyant regarding our circumstances today in America, with the ascendancy of the xenophobe Trump.

“So when the day comes when whites are really fed up – I don’t mean these jive whites, who pose as liberals and who are not, but those who are fed up with what is going on – when they learn to establish the proper type of communication with those uptown who are fed up, and they get some coordinated action going, you’ll get some changes,” he said.[13]

Brother Malcolm comprehended the unifying power embedded in Islam and for that he was martyred by conspiring white supremacists, probably in collusion with the FBI.[14]  All these years later, are we Muslims sufficiently fed up?  Are we now ready for coordinated action with other oppressed minorities? Or do we still fail to grasp the unifying power of our religion?

[9] “Chronology of the Life and Activities of Malcolm X,” BrotherMalcolm.net, accessed March 9, 2017.