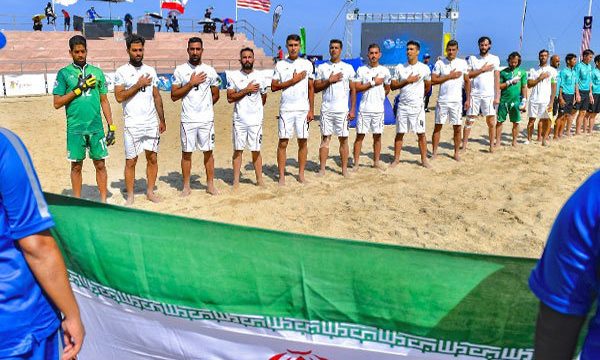 On Saturday, the Emirati players began the title clash staged on the Pantai Batu Buruk beach in the northeastern Malaysian city of Kuala Terengganu in a better fashion, and sent a number of passes on Iran’s goalpost. Iranian goalkeeper Seyyed Payman Hosseini, however, saved well and dashed their scoring hopes.

The Iranian team then managed to gain the lead, and forward Moslem Mesigar tapped home from close range to hand Persians an early lead.

Iran was awarded a penalty later on and Mohammad Ali Mokhtari placed the ball at the back of the opponents’ net to round off a dominant first half for the favorite champion.

The Emirati team sought to narrow the deficit after the break, and Kamal Ali Sulaiman went close with a volley. However, Mesigar’s cool header found the net and put the Persians four-nil ahead.

The Emirati custodian Humaid Jamal eventually dragged his team back into the game, and opened the scoring for the UAE outfit four minutes from time. The hopes were immediately raised when Haitham Mohamed netted following neat approach play.

Nevertheless, an accurate free-kick by Seyyed Ali Nazem, followed by Amir Akbari’s volley and a goal scored direct from a penalty kick sealed the 7-2 win and the title for the Iranians.