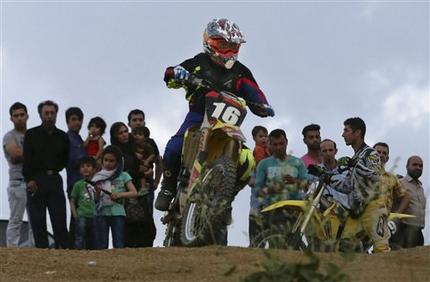 AFP- Behnaz Shafiei, Iran’s path-breaking female motorbike champion, lands a spectacular 15-metre jump on a track near Tehran — all the more astonishing given that this would have been illegal a year ago.

At 27, Shafiei has become a symbol of the shifting social norms for women in Iran, realising her dream of becoming a professional biker despite living in a country where she is not allowed to ride on public roads.

It was only around six months ago that the government allowed women to train on private circuits, and only a couple of months since this female-only track opened outside the capital.

“Before it was illegal, but today there are around a dozen women that ride professionally,” she said proudly, leaning on her Suzuki 250X.

The track might be segregated — with large banners reminding men they are not allowed — but Shafiei still trains with a man: Motocross veteran Javad Zanjani.

“It’s great that women are riding,” he said. “It’s been 35 years that I’ve been doing motocross and I never thought it would get so much interest from women.”

There have already been two female-only competitions — Shafiei won the first — but they also organised a training day that attracted some 50 women.

“They came from all over Tehran and the region. There was a 60-year-old woman who came with her 40-year-old daughter to train,” he said.

‘DRESSED AS A BOY’

Shafiei was 15 when she first saw a woman riding a motorbike in a small village near Zanjan in northern Iran.

“I was surprised and asked her if women had the right to ride motorbikes. She showed me how to do it and I liked it immediately,” she recalled.

She bought her first bike when she was 22 but had to be sneaky about using it.

“For two years, I rode my bike in the evenings behind the house dressed as a boy.

“When people realised I was a woman, most were encouraging, but some men said my place was in front of the washing machine or in the kitchen,” she said, laughing.

She decided to go full-time with the motocross, and along with Zanjani, badgered the ministry of sport until her perseverance finally won her the permission to train openly.

“Many Iranian women complain about the restrictions which stop them doing lots of things in this country, but it’s not the whole truth, because many can still shine in spite of the constraints,” she says.

Iranian women are forced by law to cover their hair and neck in public, so Shafiei takes care to tuck her dyed-blonde hair neatly into her helmet to pre-empt any criticism from conservatives.

She is glad to be an example for young girls in Iran as they push back against long-standing traditions.

Women in Iran still have a lower status than men in some respects — particularly in legal disputes over things like inheritance and divorce.

But they face far fewer restrictions in daily life than in more conservative countries — permitted to drive and notably out-numbering men in universities.

The traditional black “chador” robe has been increasingly replaced, particularly in wealthier areas, by skinny jeans, make-up and colourful headscarves loosely thrown over the back of the head.

Sport remains a flashpoint, with clothing rules effectively barring women from certain events such as swimming.

But women are elbowing their way into sports such as karate, athletics and volleyball.

Shafiei hopes the next step will be allowing women to ride motorbikes in town.

“If we fight for these ideas, we will certainly win,” she said. AFP